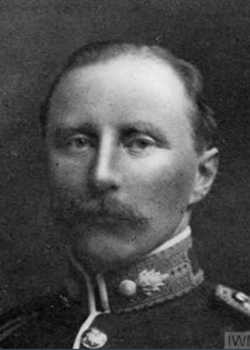 Educated at Eton and the Royal Military Academy Sandhurst. HE was a JP, DL and County Councillor for Wigtownshire and a Director of Crichton Royal Institution.

Married 1909 Lady Mary Percy, daughter of the Duke of Northumberland. They had four children.

He entered the Grenadier guards in September 1897. He served in the South African War.

On mobilisation he immediately rejoined the Grenadier Guards and subsequently volunteered for service as Adjutant and second in command of the newly formed Royal Naval Division.

After four days of ceaseless exertion with little sleep , Maxwell was wounded in the head by the first shell of the bombardment of 8 October. He died the following day in the military hospital at Antwerp. He was buried in the garden there.

With special thanks to 'Tribute to the Fallen: the men of Alnwick, Amble, Rothbury and Wooler Districts 1914-1920' by David Thompson, WFA Northumberland Branch.