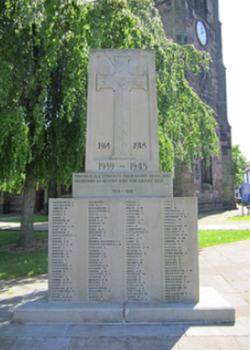 Peter Mahon’s family originated in Co. Roscommon in Ireland. His great-grandparents emigrated to Cheshire in the 1840’s to escape the Potato Famine and by 1851 were living amongst a numerous Irish community in Lewin Street, Middlewich.

Mary Mahon, their granddaughter, gave birth to Peter on 14 February 1876 and he was baptised at the local Roman Catholic Church of St. Mary’s on 3 March 1876. He was one of at least two illegitimate children born to Mary Mahon. The name of his father is unknown. His mother seems to have taken no responsibility for him and he was brought up by his grandmother, Margaret Mahon.

For most of his working life Peter Mahon was, in the words of the National Census, ‘an ordinary farm labourer’ living in:

1914 – on his enlistment into the Cheshire Regiment, Holmes Chapel Road, Middlewich.

On 7 December 1914 he enlisted in the Cheshire Regiment at Middlewich, having previously served, according to his Service Record, for two years and 311 days with 2nd Battalion. On 12 December he was sent to 3rd Battalion for training and on 6 March 1915 to 1st Battalion in Flanders.

The record of Peter Mahon’s life and death is sadly punctuated by mistakes:

He is remembered accurately on the local War Memorial and on the Cheshire Regiment panel (19) on the Menin Gate.

Sincere acknowledgement to Philip Andrews, who wrote about Peter Mahon in ‘The Fragrant Blossom of Middlewich’ (pub. Synchronized Communications, South Ruislip, HA40JS) - the record of the men of the town who died in the First World War.