The Commonwealth War Graves Commission has changed the commemoration for Captain Fergus Bowes-Lyon, an uncle of the late Queen Elizabeth II. Fergus died in France during the Battle of Loos in September 1915 and, until now, had been commemorated by the Commonwealth War Graves Commission on the Loos Memorial as he had no known grave. His grandson wr…

Ian Montgomery, Co-chair, Antrim and Down WFA branch, talks on ‘Thoroughbred Irishmen: Black Watch volunteers in Dublin before the First World War’. This lecture was given at conference between the WFA and the Public Record Office for Northern Ireland on military traditions in Ireland. 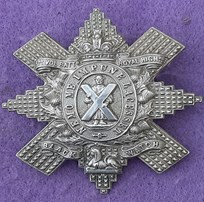 The Butte de Warlencourt. .Bob Paterson, the branch's first chairman and now custodian of the Butte will give an update on the ongoing work to preserve this important site. This will be our first face-to-face meeting in Dundee in more than two years, hopefully we will see a number of old friends there.