Charles Fairs talks about a collection of letters and diaries written by his grandparents and their immediate social circle during the Great War that he published in 2012. The central character is his grandmother Marjorie Secretan and Charles talks about how the war affected her as she lost her brother, fiancé and other close family members before meeting and marrying Charles’ grandfather Charles Fair after a whirlwind romance in 1917. 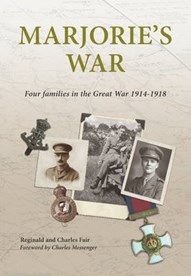