'A Nation in Arms; a social study of the British Army in the First World War' by Ian F W Beckett and Keith Simpson. 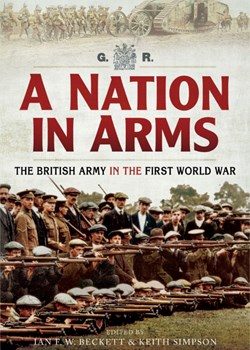 [This review, by 'Obturator' first appeared i the Summer 1985 edition of Stand To! - No.14. It is one of a dozen reviews in this edition, alongside an array of veteran memoirs, diaries published for the first time and academic articles on the Indian Army, the German Air Service and gas warfare. Archived issues of Stand To! are available online to members).

Here it is at last, the book I've been waiting for and speculating about in STAND TO! for some months.

Have I been disappointed? Not in the least. Without doubt this book of eight essays by seven leading British military historians is an important pioneering work that is indispensable reading for anyone interested in the British Army of 1914- 1918.

Following an overview by Ian Beckett we find Edward Spiers on "The Regular Army in 1914", Keith Simpson on "The Officers", Clive Hughes on "The New Armies", Ian Beckett on "The Territorial Force", Peter Simkins on "Soldiers and Civilians: Billeting in Britain and France", Jay Winter on "Army and Society: The Demographic Context", Keith Jeffery on "The Post-War Army", and lastly Keith Simpson's "Annotated Bibliography of the British Army, 1914-1918".

Each piece is written by an undoubted expert in his field and contains a good deal of food for thought. I don't have a particular favourite, but I must mention Keith Simpson's work on "The Officers", not least for this passage on generals and their staffs:

"It was not that British generals or their staffs lacked courage - seventy brigadier-generals and above were killed in action or died of their wounds during the war. Rather, they became isolated from the front line by new managerial problems which they had not mastered, and at the same time they continued to live the lifestyle of traditional commanders and their staffs who in the past had been able to live physically close to the battlefield". He also shows that the " 'three- week subaltern' is largely a myth".

The same author's annotated bibliography is excellent and while I don't always agree with his comments they will prove a boon to anyone seeking some guide as to the worth of the volume under review.

If you can only afford to buy one book this year I advise you to buy this one. It will repay the invest many many times over.