A Sergeant Major’s War. From Hill 60 to the Somme 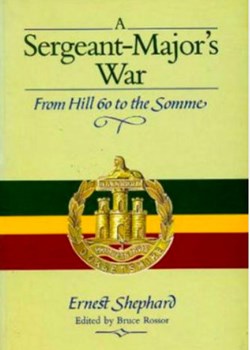 Published by The Crowood Press

When Ernest Shephard was killed on 11th January 1917, at the “Chalk Pit” so ended this professional soldier’s life and diary.

From the moment Ernest a loyal member of the Dorsetshire Regiment entered the war, he wrote his diary. He was part of a reinforcement draft on 26th January 1915. For 2 years he wrote about his war, and that of his comrades and friends. Ernest entered the conflict as a Sergeant, but was soon to become Sergeant Major, and finally a Commissioned Officer.

The reader is taken through every style of attack from the dreaded trench mortars, to gas and mines. Ernest is uncompromising in his dislike of the slackers and cowards. He offers praise to those who deserve it, and utter condamnation of those who blindly send his men into Armageddon. He is critical of the Politicians and Generals who so casually waste his friend’s lives.

Ernest a proud son of Lyme Regis, encourages all around him to do their best for the honour of the Regiment. To his dying day the Regiment is all that is of importance to him. Dorset should be proud of this man and those of his ilk.

Bruce Rossor, editor of this book has brought together these extraordinary diaries in a most sensitive manner. Aided by Dr Richard Holmes both men can be rightly proud of their achievement in bringing these most important of historical documents to the public domain.

In summary, A Sergeant Major’s War From Hill 60 to the Somme is a book that one should read if one is to understand what really happened on the battle fields of the Western Front.