A Touch of Paradise in Hell 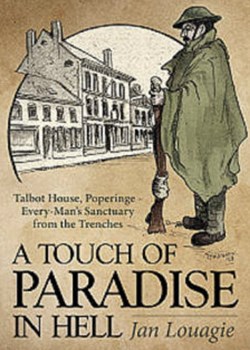 Every-Man’s Sanctuary from the Trenches

388 pp, with numerous b/w photos and images throughout the text.

List of illustrations, a list of abbreviations, ten appendices with extracts from original documents, bibliography and index.

In all my experience I have never known a place so vital to morale as Talbot House.

In December 1915, within the centre of the lively town of Poperinge, the army chaplains Philip (‘Tubby’) Clayton and Neville Talbot opened up Talbot House. This ‘home from home’ would become the best-known soldiers’ club of the British Army – and a welcome sanctuary for half a million men moving up to or returning from the Western Front.

Poperinge was located in the small remaining part of unoccupied Belgium, about eight miles west of Ypres. Talbot House had been vacated by Maurice Coevoet, the local banker who lived there, in 1915; this followed his decision to take his family to a safer place after the house was hit by a German shell. The property was subsequently rented to 6th Division of the British army, after that chaplain Philip ‘Tubby’ Clayton took charge of a soldier’s club designed to offer an alternative to what might be termed as the ‘controversial’ nightlife elsewhere in the city.

Originally the club was to be named ‘Church House’ but Colonel Reginald May proposed it be called it ‘Talbot House’ after Gilbert Talbot, who had been killed in action at Hooge on 30th July 1915. Gilbert was the brother of Head Army Chaplain Neville Talbot, and though the latter was opposed the name Talbot House was adopted.

Chaplain Tubby Clayton took charge of the clubhouse and immediately set about ensuring that there was a warm welcome for all soldiers, regardless of rank and status. The sign on the door of Tubby's office, the chaplain’s room, still reads: All rank abandon ye who enter here. His aim was for Talbot House to be an ‘everyman’s club’ – an alternative place of wholesome recreation where any soldier, regardless of rank, was welcome. The army signallers’ code for ‘T’ was ‘Toc’ and so it was that the house became known affectionately Toc H.

From the start, Tubby insisted that Talbot House had to be that place where people could forget about the war if only for just a moment. The sign placed next to the front door stated “To pessimists, way out!" set the tone for what the house sought to create for all who entered.

The author is well-placed to tell this remarkable story. Jan Louagie is the Honorary Secretary of the Talbot House Association. The mission of this Anglo-Belgian charity is to preserve the house in Poperinge as an inspirational centre of peace and reconciliation, in memory of its role as a club for ‘everyman’ during the First World War. As the current website states: Today, as real as then, the place offers a welcoming and friendly stop in Flanders fields.

The book is drawn from over thirty years of extensive research into the history of the house and the purpose it fulfilled in the lives of the men who spent time there. Over time Louagie has shared his thorough knowledge of the house and its past through various radio and television programmes as well as in previous publications; he is regularly involved in setting up exhibitions and tours, and developing education projects and digital archives.

There have been earlier books recounting the history of Talbot House, including by Chaplain Philip ‘Tubby’ Clayton himself. This new publication is however constructed in novel fashion. Louagie has chosen to tell the story of Tubby Clayton and Talbot House through the words of the Chaplain himself and those who worked and visited there. The narrative history of the house is briefly summarised within the introduction. Part One of the book forms the major part of its contents. It then goes on to describe the history of the house over the course of the war. This is a chronological selection from Tubby’s letters, many of which were to his mother, supplemented by extracts from his diary and occasional letters and writings from a range of visitors.

Part Two ‘A Home from Home’ draws on the writings of Tubby and others who experienced the house. It provides a sort of guided tour through the different physical components of the house as well as the wide range of pursuits and interests it provided for, including the Chapel and the associated religious activities. Toc H variously offered a canteen, a library, a garden, a concert hall. Alongside the spiritual there was the musical, the literary, the compassionate… and a never-ending supply of cups of tea.

The third section ‘A House of People’ focuses on the fundamental relationship between Tubby and his batman, Private Arthur Pettifer (most frequently known as ‘The General’), which lay at the heart of the survival of the house throughout the various privations brought about by the war and its fluctuating course. This part also draws upon stories from other eyewitnesses to the unique features of the experience ‘Toc H’ offered its ‘customers’.

The short final section draws upon Tubby’s visits beyond the house where he sought to take ‘a whiff of the healthy T.H. gas’ to army parishioners in the various outposts making up the front line. The subsequent appendices comprise a selection of primary documents giving further insight into the daily operation of this marvellous institution. Through it, all the Chaplain retained his faith in his religion while making Toc H open and welcoming to all.

The book is full of wonderful anecdotes and stories, often located in the excellent and prodigious footnotes. All of this combines to produce a textured picture of how the house operated and worked. A more straightforward narrative history would have struggled to give the reader such a depth of insight into the experience of the visitor. As a reviewer, one is overwhelmed by the various tales from which to quote. I have chosen the opening of the upper Chapel because it ticks so many boxes regarding wartime anecdotes, as well as displaying the inspired sense of humour and refreshing approach of Tubby Clayton himself:

For the first fortnight, the Chapel of Talbot House was on the floor below the attic… The difficulty of [relocating the Chapel to the much larger attic above] lay in the fact that one wall of this attic had been holed by a shell; and even when this damage was repaired, the R.E.’s entered their caveat against the soundness of the floor. There ensued a series of consultations which grew gloomier in ascending ratio of rank. First, two London sappers danced on it and assured us cheerily that it would stand anything. So far so good. But the lance-corporal in charge of them shook his head… An appeal was lodged with the sergeant over him, who expressed his gravest doubts. Next, the lieutenant immediately concerned tapped and condemned the joists. His captain came in one day and verbally countersigned this adverse verdict. The major of the Field Company… left us a prey to an hourly expectation of spontaneous collapse. In despair, we appealed to Colonel Tannet-Walker, who, after personal inspection, had the details of the floor worked out and presented in triplicate, proving conclusively that the attic was wholly unsafe. After this, we asked no more questions, but opened the Chapel therein without more ado.

The book succeeds admirably on many fronts. Firstly the subject matter is fascinating for anyone with even a passing interest not just in the First World War but in the experiences and reminiscences of all those men caught up in the theatre of war. This is a story built out of the worst of human conflict, with all its accompanying attributes of suffering and misery, yet through it all there is a triumph forged out of humour, compassion and goodness. In addition the structure of the book, eschewing a narrative history in favour of allowing the principal persona to tell the story in their own words, works so effectively in conveying a history based upon a building but oh so much the result of the interactions between the human personnel involved. The result is a fitting tribute to Tubby Clayton, ‘the General’ Pettigrew and all associated with Toc H.

It is a thoroughly entertaining read.

A ‘must have’ for your library.

The house is full of similar signs that, by making something clear in a humorous way, subtly take away the need for orders. Keeping a soldiers club without order and discipline might seem impossible but, by doing this, Tubby succeeded none the less.

I close with an example of one of Tubby’s famous signs, designed to ensure that a club for soldiers could run smoothly and provide a home-from-home for all, but without the need for regular rules and orders:

Note: ‘A Touch of Paradise in Hell’ was written by the father of the current manager of Talbot House, Simon Louagie.  Jan Louagie has been involved in the Talbot House museum for almost 40 years. The book is a culmination of the research carried out over this time. When the centenary of the House came up, Simon Louagie tells us, ‘ it seemed like the right time to produce another book’.

The first book was twice the size of ‘A Touch of Paradise in Hell’ but only written in Dutch.

Jan Louagie has written several articles and  is currently finishing a piece about Talbot House during the Second World War.

Those interested in Poperinge and Talbot House may also find the following of interest:

A visit to Talbot House and the museum

In 2013, preparations for the 100th anniversary of Talbot House.

A review of the small book 'Ten Tales from Talbot House'.