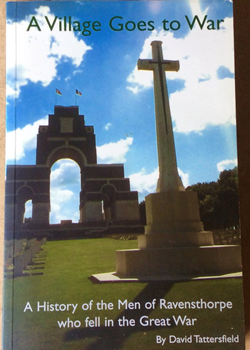 Western Front Association Development Trustee and Vice-Chairman David Tattersfield has researched the names on the memorial in his local church in Ravensthorpe, West Yorkshire. Fortunately, three large frames of photographs had also been preserved - a most unusual occurrence - covering 81 of the 114 names on the memorial. At the time of the Great War Ravensthorpe's population numbered some 6300 people.

The text, which is quite substantial, describes the background to the action. Research is thorough and quite detailed in some cases, use being made of soldier’s records, surviving documents, letters etc: and the two local newspapers, always excellent sources of detail. The result is a worthy memorial to those who fell.

My only criticism is one from a specialist who has seen hundreds of these memorial volumes. There is perhaps too much general description. I appreciate that the general reader or family historian will need to have the broad picture painted, but many members will not. But the author has done an excellent job in describing the battles in which the casualties occurred. I cannot fault the book on the quality of the research or biographical detail. The illustrations are particularly valuable.