Aces Falling, War Above The Trenches, 1918 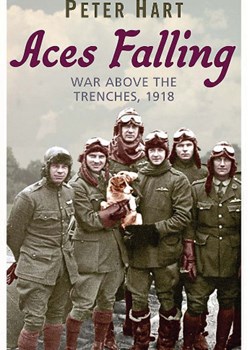 Peter Hart, as one has come to expect, has written a first class account of the 1918 Air War. He has used his intimate knowledge of Great War veterans to illuminate their vital part in achieving the hard won victories in the late summer and autumn of 1918.

In this book Peter Hart has made extensive use of the Oral History Archives held at the Imperial War Museum. Each chapter is well illuminated with the reminiscences of those who were there. Along side Hart's simple yet very effective understanding of the conflict he is writing about, one comes to understand just what the pilot's and aircrew of the Royal Flying Corp and later the Royal Air Force had to contend with on a daily basis.

The book certainly draws the reader into the chaotic and turbulent world of the air crews. Many had joined for the thrill of flying, this excitement is soon lost and Hart allows the words of these brave men to tell the reader how they actual felt.

Many people have, over the years, idolized the "Aces". Their role in achieving the victory of 1918 has been overplayed by many authors, Hart has not fallen into this trap. He calmly and quietly explains why they were important for raising moral both on the Western Front and at home in "Blighty". However in the whole spectre of this conflict as individuals they really did not hold pivotal positions.

I feel many modern day authors pay scant attention to the photographs used to illustrate their books. In this volume we see many new pictures, many of which are horrific in nature. They illustrate exactly just how appalling the air war was.

The only critisism I have about the book is not the content which is first class, but the light grey texts used for the many quotes. Anyone with failing eye sight will struggle to read them.

In conclusion I would recommend this book most highly. This book explains to the reader exactly just how horrific the air war was, but most importantly it places the role undertaken by the RFC/RAF into its correct historical prospective.