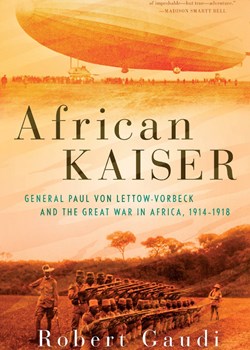 I do not normally read others’ reviews of books before writing my own and, although I do not have great regard for Allan Mallinson’s works on the Great War, he is a compelling reviewer and the first line of his scathing opinion of African Kaiser (Spectator, 12th August 2017) drew me in head first.

His comments on its authorship and its hyperbolic cover blurb (by the Washington Post writer Michael Dirda are scathing). Dirda noted: “If all military histories were as thrilling and well written as African Kaiser, I might give up reading fiction.” He adds, “… Gaudi writes with the flair of a latter-day Macaulay,” adding, he “… describes naval and military action like a novel.” Sadly, as Mallinson noted, the first chapter of the book proves these views to be unsustainable and his review catalogued serious errors (which I have neither room to repeat nor the nerve to steal). My own faith in the book was dispelled too by early basic errors and a total lack of notes and references; the mark of both lazy authorship and an affront to the authors upon whom he heavily draws and quotes.

Nick Pitt in a review of a new biography of Muhamad Ali noted that the book was “… a fine piece of journalism, fact checked almost to death and wrought with sound judgement and rigorous prose. African Kaiser enjoys few of these key merits. Gaudi habitually overwrites, deploys minefields of adjectives, inelegant grammar and punctuation.

Since all ‘facts’ here are clearly erroneous and unreferenced I frequently asked, “Really? Is that true?” Equally, it is not truly a biography of von Lettow Vorbeck – although he takes central stage - but an overview of the Great War campaign in East Africa based on published works. Nevertheless, as the work progresses, the writing improves - or one becomes inured to the author’s authorship.

Gaudi’s chapters on von Lettow Vorbeck’s experiences in China after the Boxer Rebellion, and in German West Africa, during Germany’s genocidal destruction of the Herero and Hottentot people, do offer valuable outlines of events. But overall African Kaiser fails to meet Nick Pitt’s standards or mine. It lacks evidence of fact checking, editing or professional proof reading. Its maps, though clear, are inadequate. It lacks photographs. (A biography without a single photograph of its ‘subject’ seems insulting and penny pinching.)

Von Lettow-Vorbeck, was capable soldier and logistician, a German patriot who became a convinced anti-Nazi. One cannot feel other than that he, and the Great War in Africa, deserve better work than this (and a more accurate title). In concluding his coruscating review, and the bumf writer Dida, Mallinson notes, "… Dida would have done better to read African Queen". Good as that book and the film are, better even would be William Boyd's Booker Prize winning An Ice Cream War.  It is modern classic novel about wartime events in Africa - and fiction.

African Kaiser is a book for Great War in Africa completist collector, yet I suspect they will be as sadly disappointed with this book as me.