Archduke Ferdinand and the Era of Assassination by Lisa Traynor 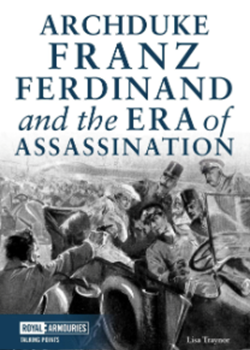 There has been no shortage of books since the ‘shot that rang around the world’ was fired, although the raging torrent of print of a few years ago has begun to slow to a trickle as non– specialist publishers hammer the final nails into the sealed lids of their boxes marked ‘First World War’...for a while at least. Reaching all the way back to that momentous day in 1914 in Sarajevo, Lisa Traynor’s Royal Armouries monograph offers a sound description and evaluation of the event, precise details of weapons used and evaluates the possibility of the Archduke’s survival had he been wearing an unusual body armour invented by one Casimir Zenglen.

The author, a firearms specialist at the Royal Armouries – concise in her authorship – also shows that Ferdinand was but one of 36 targets of successful assassination plots against those in ‘high profile positions of power between 1896 and 1914’.

In addition to evaluating the weapon used and its contemporary alternatives, she details her research into a silk–based body armour – protection so effective that it could, conceivably, have saved the Archduke’s life. Whilst there is no definite evidence (either way) that he wore the patented proven – and here reproduced – silk based Zeglen Bullet Proof Cloth Company armour, the Royal Armouries innovative scientific evaluation of faithfully re– created examples of the armour are sufficiently surprising to create a fascinating and credible Great War ‘what if’.

Well–illustrated in colour and monochrome – and by the author’s research and expertise – this, the fourth monograph published by the Royal Armouries since 2017, is both an intriguing and worthwhile addition to the series.

[This review first appeared in Stand To! 117 February 2020. Members of The Western Front Association received Stand To! X3 times a year and our in house magazine Bulletin x3 times a year as part of their annual membership fee].