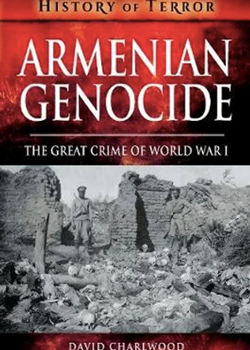 ‘Who, after all, speaks today of the annihilation of the Armenians?’ Hitler asked in August 1939, while planning his Polish massacres. A hundred years after the Turkish Holocaust event, and Turkish denials, people do speak of it and Genocide: The Great Crime of World War is a searing record of that genocide. In 1910 Mehmed Talaat, prominent among the Young Turks in 1910 remarked in a casual conversation – ‘If I ever come to power in this country, I shall exterminate the Armenians’.

When he became Minister of the Interior, he proceeded to do just that. While exact figures are impossible to establish, it is generally agreed that 1.5m Armenians were killed out of a population of over 2m, as well as some 300,000 other Christian inhabitants of the Ottoman Empire.

There had long been pogroms against their populations, but from the start of the Great War killing was organised and systematised. Ten thousand criminals were released from prisons on amnesty and formed into murder squads. The official justification was that the Armenians were in league with Russia and planning revolt. The reality was that they were Christians in an empire ruled by Sharia law.

Hounded from their homes, they were deprived of their possessions, tortured, burned alive, or driven into the desert to a promised but mythical safety in Syria, with no water, food or shelter. Very few ever survived the death marches.

Henry Morgenthau, American ambassador to Turkey, constantly petitioned the Turkish leaders about this crime, but was always rebuffed. The German ambassador, whose support as representative of another Christian country and Turkish ally might have carried weight, chose to believe the official explanation.

Charlwood’s account is graphic and gripping, founded on well documented witness accounts, backed up by archaeological evidence and photographs. Short but comprehensive it is an excellent account of these atrocities.