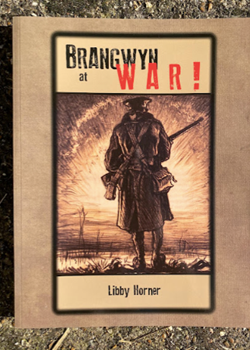 In archival footage, discusses his achievements, working methods and views on art.

A Malachite Production of a Goldmark Film (2006)

Having caught this exhibition by chance at the beginning of June I have been worried ever since that I might not write up and publish my supportive  review in time for people to go along. It is therefore a pleasure to learn that Frank Brangwyn at the Ditchling Art Museum is available for five months - running from late spring to autumn, from May until 26 October.

I cannot recommend it enough for Frank Brangwyn’s story and his character, the quality of craft on display and the artist’s attitude to life and art made in various pronouncements and in his playfulness. There is a distinct angle on the First World War for his posters - he produced  90 recruiting posters between the outbreak of the war and June 1915). 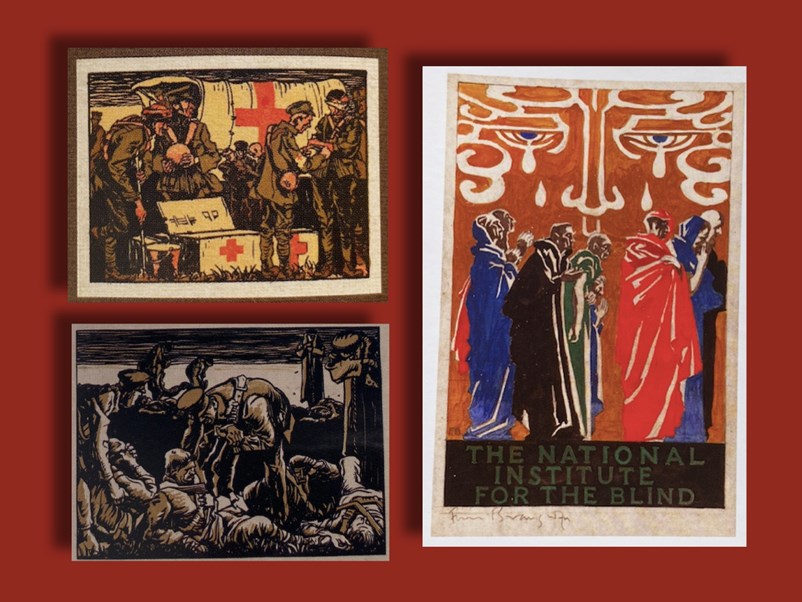 Libby Horner, his biographer and compiler of the artist’s catalogue raisoné described him as “one of the most outstanding poster artists of the Great War, in terms of quality, design and technical accomplishment". 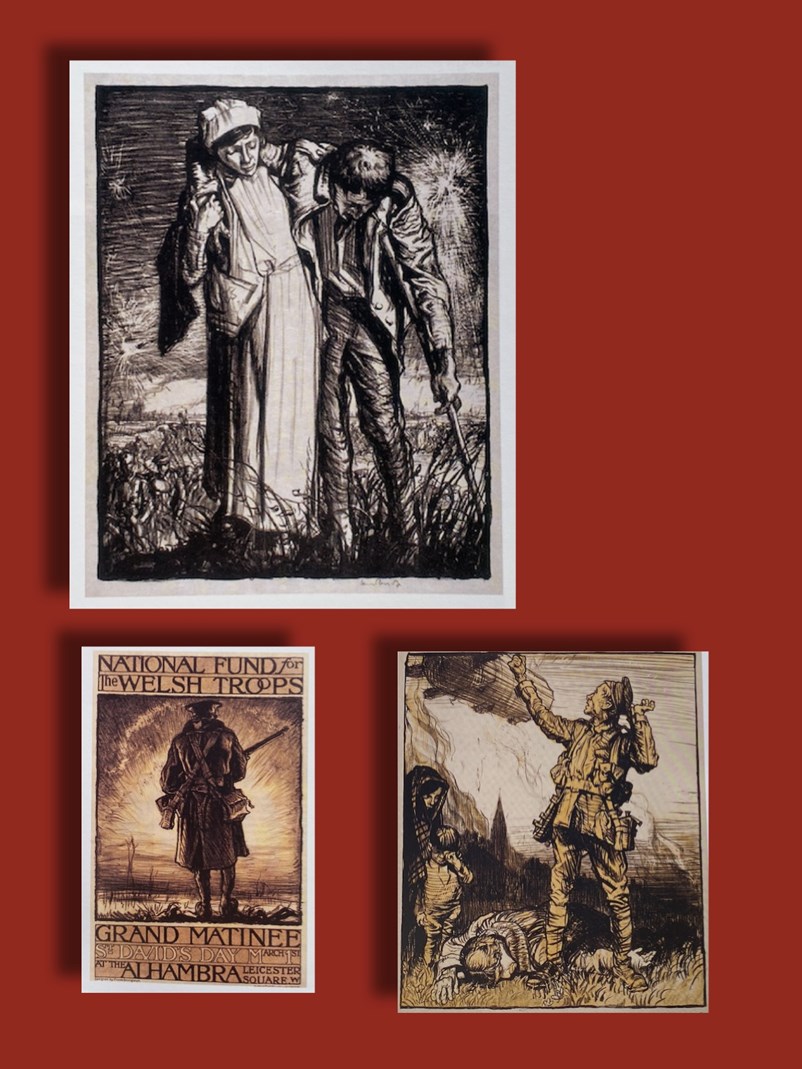 In her excellent summary of why and how posters were the main medium of communication during the First World War, Libby Horner describes three different phases which can be summarised as: 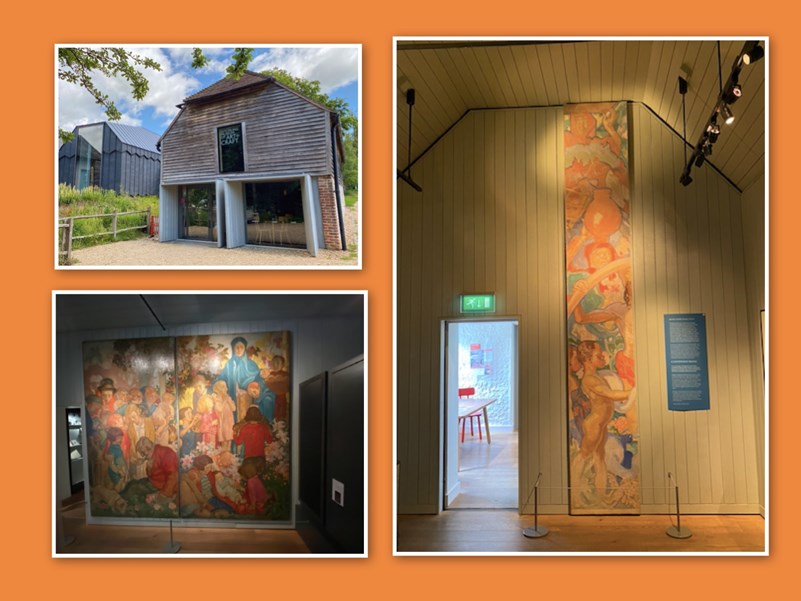 Brangwyn was commissioned to create, most especially a set of huge murals commissioned to decorate the House of Lords. His initial ideas were rejected as ‘too religious’ and nationalistic, so instead his sponsor/patron gave Brangwyn freer rein to look beyond the war and celebrate the British Empire. Sadly, having given seven years of effort to the enterprise, after the death of his principal sponsor, what Brangwyn finally produced was also rejected. 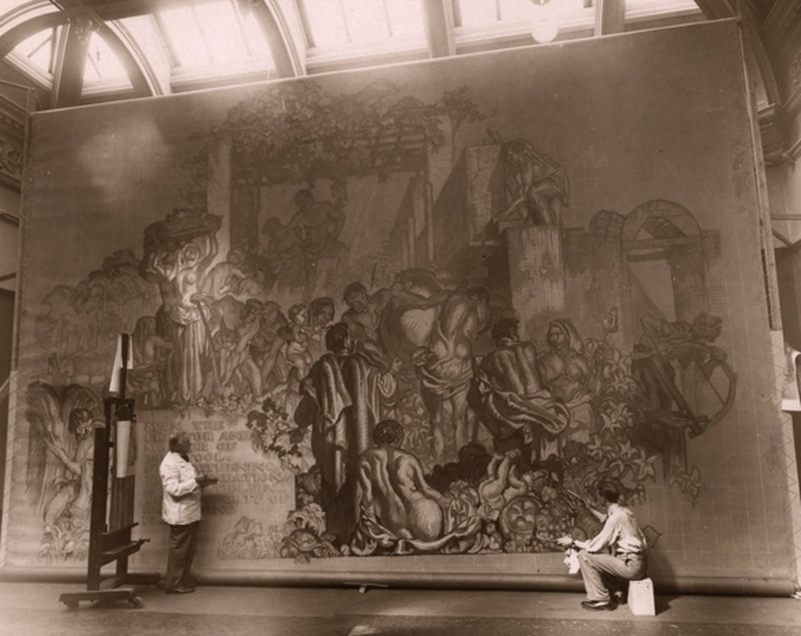 Libby Horner describes Brangwyn as "a polymath; the quintessential artistic craftsman’ who could turn his hand to almost every area of artistic production". 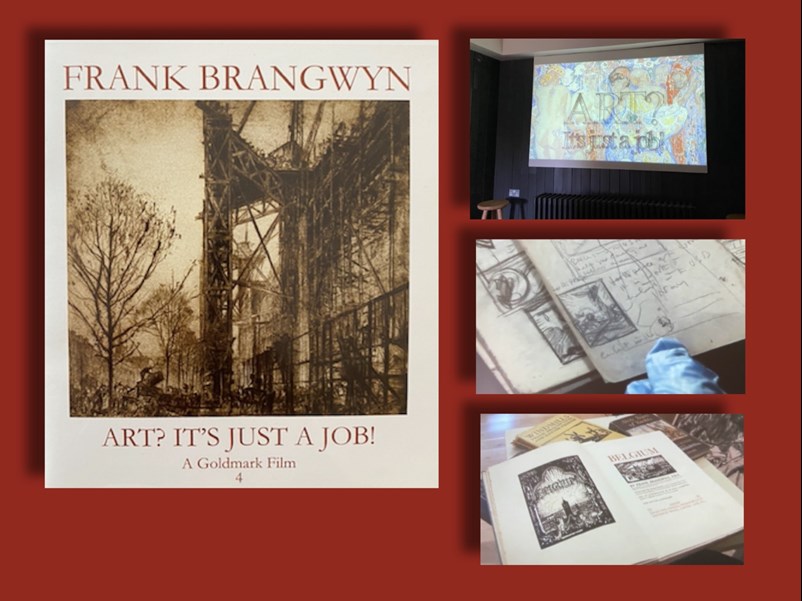 There is a charming hour-long documentary (available as a DVD) in which Brangwyn is played by an actor in a set of engaging interviews; he would have made a wonderful guest for Graham Norton. Brangwyn has talent, but also a sense of humour and a love for life. Donald Sinden has a small part to play; as a boy in the village of Ditchling in Sussex where the Sinden’s lived (his father ran the pharmacy and a photographic studio) he was often commandeered to pose in various ways, the pose drawn up or photographed to be worked into a mural - indeed Sinden points out that in some pictures he appears three or more times in different roles and poses.

Brangwyn lived in Hammersmith in 1900 at Temple Lodge, 51 Queen Street, which he extended by adding a double-height studio - one of the largest in London. For the most part Brangwyn painted his mural here on huge canvases rather than painting them in situ (there were exceptions). After the first Zeppelin air raids in May 1915 Brangwyn felt the need to get out of London, and to make his art safe. He found a property in the village of Ditchling where he moved for the duration of the war until 1920, then keeping Ditchling as a country retreat until he moved permanently to Sussex.

You don't just have to have an interest in the First World War to attend the wonderful Brangwyn exhibition at Ditchling Museum though his volume of output certainly increased during this period and kept him busy until the 1930s. Brangwyn is a charming character and a skilful artist who hasn't perhaps had the recognition he deserves, yet many of his posters and some of his murals will be familiar to us.

There's a book, a DVD and an exhibition - in due course there will also be a Mentioned in Dispatches podcast in which Dr Libby Horner will talk about the work of Frank Brangwyn during and after the Great War.