Brighton in the Great War 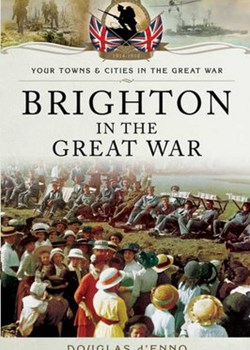 272 pp, including various b/w photos placed within the text.

Five appendices, bibliography of sources and further reading, plus index.

One of the Your Towns and Cities in the Great War series published by Pen & Sword.

When I found myself drawn to Sussex following my first stay in the county over six years ago – my wife and I moved down here to live last year – the prospect of regular access to Brighton was one of the reasons.

Aah… Brighton. The sun, the sea, the various pleasures and experiences of all kinds that it can offer its visitors. Nothing can beat browsing its shops and attractions over the course of a lazy weekend. For me, on a sunny afternoon, all a chap requires is a Brighton café offering the best coffee, chocolate cake, and an outside table and chair where he can relax and enjoy a smoke.

And nothing has changed much in the past hundred years. During the Great War Brighton maintained its status as a destination of pleasure and entertainment for all – and a welcome respite from the sorrows and discomforts at home and on the front line. To guide us through the town’s First World War experiences, Douglas d’Enno is ticketty boo. He has written a number of books on the Brighton area and Sussex and become an acknowledged authority on local history. He has also carried out extensive research into the impact of the First World War on the nation’s fishermen and their ships. This led to his first volume of their history, Fishermen Against The Kaiser, which I had the pleasure of reviewing last year.

For his history of Brighton in the First World War – which, as he points out in his introduction, is the first time this story has been told in all its aspects - d’Enno has carried out a painstaking trawl of contemporary press and local publications. The result is a chronological narrative of incidents and events spanning the five years from the outbreak of war in 1914 through to the armistice in November 1918. The book charts the various activities and developments within the town and its environs – with due reference paid to next door neighbour Hove – throughout the period. The history is presented chronologically with a separate chapter devoted to each year of the war.

The contents are rich in stories and anecdotes through which the author seeks to convey the events of daily life during an unprecedented period of high drama and social change. As appropriate d’Enno describes the local consequences of national policy making; for example the stages in the introduction of conscription and sample cases and appeals which were examined at local tribunal hearings. Conscientious objectors apparently made up only a small proportion of the applications and Brighton’s records show a high success rate in achieving exemption from combat roles; however particularly towards the later stages of the war, some men were required to undertake military related duties and due action was taken against those who failed to comply.

The book is populated throughout with photographs and pictures, many of which were supplied by local collectors and historians. They all add to the authoritative feel of the narrative as it proceeds. The images include contemporary photographs as well as posters and cartoons, adding to the sense of time and place conveyed by the text.

Other highlights for me – although there are plenty of anecdotes to engage your interest – included the varied consequences of the restrictions on lights and illuminations, and attempts to avoid these. For instance the lodger (a real life baronet and JP) whose refusal to dim the lights in his room caused his landlady a fine of 40 shillings.

Special constables were often responsible for identifying and reporting transgressors. I was fascinated by the book’s accounts of how women also wanted to play their part in assisting local law and order. By 1915 there were two female forces on patrol, a cause of some confusion and subsequent argument. The Chief Constable complained through the Daily Mail about the ‘Women Police Volunteers’ who wore a uniform very similar to a regular police uniform. Meanwhile Brighton’s officially recognised ‘Women Police Patrol Force’ did not in fact have a set uniform but only a specified armband. Both forces appear to have had some overlap in their roles, looking to protect the morals of the town and its girls and promote the setting up of suitable clubs to provide appropriate activities. 1916 saw the establishment of the Women’s Auxiliary Force (WAF) which sought to involve women in a broader range of services supporting the community. There are many references throughout the book to the impact of the war upon women and the resulting issues around employment and maintaining family life during wartime.

Other themes running through the chapters include the growth and popularity of Brighton’s entertainments; and the gradual problems of food supply as the war progressed. The author provides a lovely set of stories around the latter topic; not least when the mayor took direct action and captured (or in his official term for the action, ‘requisitioned’) ninety sheep waiting at Brighton station for dispatch to butchers’ shops in London.

d’Enno also provides a very good potted history of the town’s involvement in providing hospitals and medical services; most famously the use of the Pavilion as a hospital for wounded troops from the Indian Army units serving on the western front.

All in all this is a fine book which delivers on what it promises, a history of Brighton during the First World War. The author has rightly in my view eschewed any attempt to draw out any grand themes or wider conclusions – focusing on providing a carefully researched piece of local history. It provides an interesting read for anyone who enjoys learning about life on the home front – and will of course hold particular value for anyone who lives in or has a connection to the town itself. There is also a very good section at the end providing information on sources and further reading.

Recommended for readers who want something colourful and lively – no heavy going – and enjoy a good time. Much like Brighton itself!