Britain's Railways in the First World War by Michael Foley 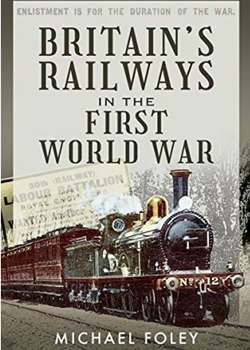 The classical place to start when researching the railways of the United Kingdom during the Great War is Edwin Pratt’s two volume work published in 1921. It covers, almost exclusively, the role of railways within the United Kingdom, whilst a series of articles published in the Railway Magazine during 1933, which dealt with the Railway Operating Division (Royal Engineers) in the rest of the world. In addition, there have been a small number of recent books which have added to the story as a result of having access to original records which weren’t available to those authors.

Unfortunately, this book adds almost nothing to that knowledge, being drawn almost exclusively from secondary sources and also being peppered with inaccuracies, generalisations, and obvious errors.

Divided into six chapters, each of which takes a year of the war (the final one covering 1919) the book reads like a series of research notes somewhat randomly tagged together, often with a fairly tenuous link to the Great War. An example of that is where the author briefly describes the Hundred of Manhood and Selsey Tramway, including the fact that it never constructed its proposed branch to Wittering. The reader waits to hear what its role was in the Great War, only to be told that, “with army barracks and the First World War Grayingwell Hospital at Chichester, there must have been a number of military passengers using the tramway.” There are many other places where terms such as this and, “may have”, “probably” and similar are used in an effort to make what would otherwise be random pieces of information relevant to the author’s purpose.

There are numerous errors, whether as a result of lack of knowledge or of extremely poor proof-reading is difficult to say.  A list of the formal pairings of Military Command Areas (such as Southern Command) with Railway Companies occurs three times. Each time the pairings are different (they appear to be correct in the version that appears in Chapter 1) and it must have been obvious that it was extremely unlikely either that Southern Command would be paired with the LNWR (it was paired with the LSWR) or that Western Command (with its HQ in Chester) would be linked to the North Eastern Railway (with its HQ in York). When discussing the problem of empty wagon mileage and the pooling of wagon stock later in the war, the author keeps referring to wagons as “cars” – presumably the term used from his secondary source.  The Caledonian Railway may, indeed, have supplied the Grand Fleet with coal, but not by carrying it direct to Scapa Flow (as is implied) but via their port at Grangemouth on the Firth of Forth, where it was loaded into colliers for onward passage by sea!  There are even more basic errors: Mr Foley states that the Great Central Railway built a hotel (which he calls the “Hotel Great Central”) next to their London terminus “at Paddington”!!!

As for the illustrations, almost all are well-known and often not really relevant. The captions, too, are often faulty – the never has been a “London & South Coast Railway”.  The author’s style is also difficult. The entire book is written in short sentences and conjunctions are almost non-existent.

In conclusion, this book will add nothing to a reader’s knowledge of the important role railways played in the Great War, it may well give those without previous knowledge of the subject erroneous information, and is best avoided.