British Widows of the First World War: The Forgotten Legion 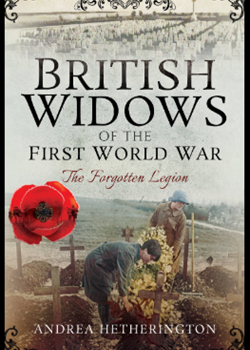 Andrea Hetherington’s book is a well–researched addition to the historiography of the Great War – of particular interest to social historians – on an aspect of the war upon which few dwell today. Yet, in 1919 there were some 200,000 war widows in Great Britain.

The opening chapter offers a sound description of the evolution of war widows’ pensions and how the needs of families, and attitudes to state aid, changed and led to the basis of today’s Welfare State. Much to this reviewer’s surprise, Boer War widows were paid £5 with a further £1 for every child. The Daily Telegraph raised sufficient funds for a lump sum of £20 with an ongoing weekly pension of 5s 9d, which seems reasonable for the start of the twentieth century – but there were only around 3,000 widows from that war.

The book’s real strength is the description of how the Great War changed almost fanatical Victorian conventions regarding death – like those which laid down rules for how long one wore black. That were no bodies to bury and the fact that that people at the time set huge store by being able to give somebody a ‘good send–off’, regardless of class, was one of the main reasons for the concept of the Unknown Soldier.

At the beginning of the war, the ‘widow making’ potential was unforeseen. The author offers uncomfortable reading about the treatment of the poor meted out to some whose husbands gave their lives or because their husbands were being punished for a military crime. The story was often different for the upper classes and the author has unearthed stories of the great ingenuity put into making ends meet as well as those of more well–off widows putting their own grief aside to try and ameliorate the suffering of others. Recommended.