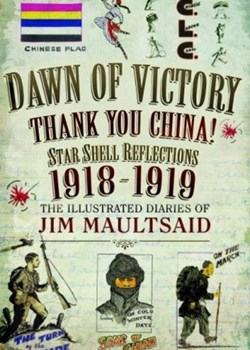 The centenary of the end of the First World War this year is unlikely to bring a change in approach by the popular media. The notion of an unnecessary war conducted by incompetent military leaders is strongly embedded in the public psyche; more over the conflict will continue to be defined by the appalling toll of casualties that reached a nadir in 1918.

However, for many of those who participated and survived, the experience was much more nuanced. In the modern context it may seem crass to explore the positives of the experience – and for this reason these unedited diaries serve a valuable purpose in helping the reader to fully understand what it was really like to be part of an army in the ascendency during 1918 - the ‘Year of Victory’.

Maultsaid was an American citizen with family roots in Donegal Ireland. He joined the British Army in 1914, was badly wounded on the Somme and after a period of rehabilitation was commissioned in 1917 – working with the Chinese Labour Corps until 1920. The diaries reveal him to be a witty, articulate man with an eye for detail and a real artistic talent who does not shy away from describing the horrors of war. Indeed, this is made more shocking when juxtaposed with accounts of everyday life in the army.

Much of the content of the book concerns Maultsaid’s sharp observations on the culture, behaviour and work ethic of the men of the Chinese Labour Corps. More than this, the book gives a strong impression of scale in the logistical challenge of supplying the British and Commonwealth forces on the Western Front.

Other themes that emerge in various diary entries are the impact and effectiveness of air power, the high morale of the British and commonwealth troops during the final months of the war and the sobering effect of the scaling up of the American contribution.

Dawn of Victory his book, the final volume in a series of three, is an absolute delight packed with insightful commentary, finely drawn sketches and nicely observed vignettes of army life during 1918 – a year that started in crisis and ended in victory for the allied armies. It fully succeeds in entertaining the reader without shying away from the horrors that blighted so many families. For those seeking an alternative to the depressing narrative of futility, death and devastation that will no doubt characterize media coverage next year, this book will serve very well.