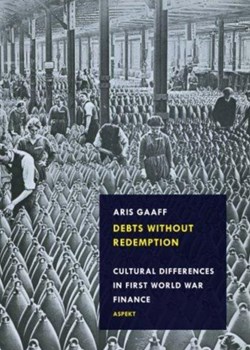 The human cost of the War is well known: the financial cost much less so. I was reluctant to read this, being no economist and the subject appearing dry, However, Debts Without Redemption proved both an interesting and important study by a financial expert and Netherlands W.F.A. member on the way in which the belligerents (principally Britain, France, Germany, the U.S.A.), financed their war. In excellent English, the Dutch author offers an enlarged and updated edition of a work which revealed the long-lasting problems that resulted from the war in which technical terms are well explained, personalities described and enjoying an occasional dash of humour!

In 1871, France was forced to pay reparations to Germany. It did so quite quickly - at the cost of a much-increased national debt. Boom and bust followed the war Franco-Prussian war in Germany to the extent that Bismarck supposedly claimed that the next time Germany beat France, it would pay the French reparations!

Germany began the Great War expecting a rapid victory and that its enemies would pay the costs. As the fighting continued, Germany financed its war expenditure from massive war loans from its population, exploitation of occupied territories and printing money. Although these measures created inflation, they did not raise taxation seriously.  The French took a broadly similar approach. Britain raised taxes and borrowed, whilst simultaneously lending large sums to its Allies. The U.S.A. made big profits from war supplies, yet created massive debts from its allies.

Whilst the victorious powers hoped to return to the pre-war financial standards, the Great War proved too expensive. Britain’s national debt increased tenfold. Politicians bowed to public pressure to ‘make Germany pay’, although the country had imposed grasping reparations on Russia, it proved impossible for it to meet the demands for reparations - or even the more realistic sums assumed by Lloyd George and others.

In consequence, Germany to was forced to borrow from America which, in part, paid partial reparations. Without reparations from Germany the victors faced huge difficulties in repaying its debts to the United States. Britain made an honest attempt, despite debts owed by Russia and France yet, eventually, had to admit defeat. The French made much less effort; the newly communist Soviet Russia repudiated all debts.

The reparation and debt issues poisoned international relations, led to massive inflation in Germany, and to a lesser extent France. Ultimately German savers, and taxpayers, especially, in American, paid the price. Paradoxically, despite default by its creditors, the US, a debtor nation before 1914, became a creditor and overtook Britain as the world’s financial centre.