Defeat at Gallipoli by Nigel Steel and Peter Hart 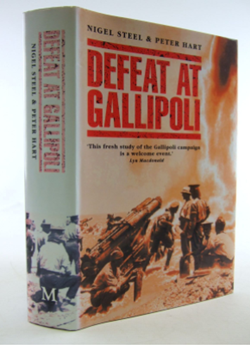 Those of us who seek to pass judgement on the conduct of the Western Front campaign really should study what happened when we attempted to achieve a less costly decision through attacking Germany's allies. This book can therefore be recommended as being the best serious work of the Gallipoli campaign for a good many years.

The authors, who are on the staff of the Imperial War Museum, London, set out to describe the campaign as it was seen by the fighting man and to this end make considerable use of personal accounts, most of which have not previously seen the light of day and when made were not intended for publication. There is therefore a feeling of knowing what it was really like at the sharp end, which will be appreciated by many. Wisely the authors do not attempt any detailed analyses of the various personalities involved, but we are given valuable pointers towards the characters of Hamilton and Hunter-Weston. Neither do Steel and Hart make any comprehensive assessment of the higher direction of the campaign, although what they do have to say is useful and on the whole objective.

There are several points about the book which particularly appeal to me. There is, for example, a fairly lengthy chapter devoted to describing the dreadful conditions under which the men lived and fought. It also examines the Suvla landings, enabling us to see that the 'young soldiers, old generals' explanation for their failure is a gross oversimplification. Quite heavy casualties were incurred by some units and useful gains were made. Moreover the Anzacs' advance, which the landings were designed to assist (and not the other way round as we are sometimes led to believe) had faltered early on.

Altogether one must conclude that whatever the faults of the corps, divisional and brigade commanders, the blame must be shared by the C in C and his GHQ staff. Confusion is inevitable in even the best ordered battle but seems to have had a quality all of its own in the fighting on the peninsula. The evacuations are also very well covered although I would liked to have seen the point driven home that we were not driven from the peninsula.

No one can claim that Gallipoli was a victory for us, but in view of the slothful way in which the British Government embarked upon the operation, the wholly inadequate military resources allocated to it, the tardy reinforcements sent, and the inherent difficulties of the operation, he wonder is not that we did not achieve our aim, but that we achieved so much. We must also remember that the Turks did not achieve their aim of driving us into the sea: most observers would agree that there was little prospect of them being able to do that if we had been determined to stay and devote resources to doing so.

Perhaps we should also remind ourselves that unlike Dunkirk, the evacuation was planned, not improvised, and that of the heavy equipment, only a few worn out guns were left behind.

To sum up this is a thoroughly researched and well written book. It has several small scale maps, and there are some good photographs, some of which I have not previously seen. I was particularly impressed by photograph number 19 showing the 1st Royal Munster Fusiliers eighteen days after the landing at Helles. They were by then only 379 strong but the soldierly bearing is an eloquent testimony to the 'old army'. The caption to number 4 misidentifies Hunter-Weston.