Doctors in the Great War 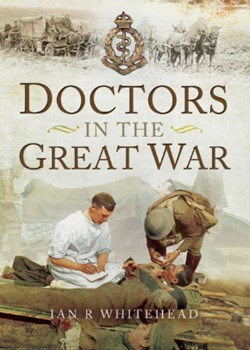 his work by historian Ian R Whitehead highlights an area of the Great War that has been obvious to any student of the war, but not analysed and explored in detail until now. He has researched a vast number of official sources and non-official in an effort to ensure that those who served in the Royal Army Medical Corps (RAMC) can have their contribution to the Great War laid out in a fascinating timeline. Such was the demand for medical assistance that by 1918 he explains that 1 in 2 registered doctors, some 18,000 doctors, were on active service. This meant that half of all British medical doctors were serving mainly in France and Flanders and thus unable to provide the nation with medical care due to military service. He shows the impact this had on both the nation and the military.

The book is not a history of the RAMC and does not cover any impact this shortage of doctors had on civilian health. It covers the change that the war had on those qualified, registered medical practitioners who were taken from towns and cities across the nation and sent to deal with medical emergencies that so few had actually seen before. Moving from the quiet backwaters of medical practice in a town to the horror and devastation of the Western Front was a challenge for the medical men in so many ways.

The book takes us, from the background of military medical service from 1854, to 1914 when a step-change of incredible proportions took place. The military medical service up until then had been very poorly provided for and medical officers were seen as low status personnel and not being "fellow officers"; as such they lacked the authority and had no support mechanism to collect wounded men. As a result of the low status their pay was below that of other officers and many expenses had to be met by the doctor out of his own pocket. Such conditions dampened enthusiasm for medical recruits. Even Florence Nightingale had warned of the dire consequences the training, pay and conditions were having, and would have, on doctors but no one took heed. Doctors were seen as just doctors and not men who needed to understand military tactics.
Principal medical schools began to boycott the Army Medical Services and in 1898 the War Office reluctantly gave them equality of rank in a unified corps. One of the first tests of the new service was the Boer War and even then the British Medical Journal (BMJ) wanted to see an increase in medical officers.

When the Great War began, the medical military service was unprepared for the number and severity and wide-ranging injuries. Medical men in civilian practice began to volunteer. Retired doctors were brought back to take over civilian practices while the owner was away on medical services. War Emergency Committees were set up to help mobilization and to determine if a doctor who had attested to serve in the war should go. The Military Service Act of 1916 treated doctors as a separate case to others and the War Emergency Committees still considered if it was best for a doctor to leave his practice and go to war. Ultimately the end result was that neither the military or civilian service had an ideal result.

Medical students are discussed and the importance of ensuring they completed their studies in order to maintain an adequate supply of doctors in the future. One big change of the war also highlights the fact that the war caused many medical schools to open up their doors to females for the first time. Yet the army failed to appreciate the benefits that female medical doctors could provide them. The War Office was eventually forced to reconsider women in the RAMC.

For doctors who joined the RAMC they had to accept that their ethical code was in need of change. Loyalty to the need of the state took precedence over the needs of an individual, something that some found hard to achieve.

It was only by 1918 that the Army recognised that it needed to reconsider the training of Medical Officers. The process of evacuation of casualties is examined in detail, as is the advances in war surgery. It looks at the advances in preventing wound infection, so vital in the Casualty Clearing Stations. Medical Officers were paramount in maintaining heath and morale of the men. The RAMC was able to contribute significantly to treating and preventing traditional epidemical diseases while dealing with new diseases of the war such as Trench Fever and Trench Foot. The book points out that inoculation was still not compulsory and prevention of sexually transmitted diseases were conditions in which non-medical opinions were allowed to reign. Overall the Army Medical Services did a amazing job during the Great War.

The British government was forced to consider the contribution that the RAMC had contributed to the victory. The RAMC had to adapt and improvise medicine to face the new forms of injury that came in for treatment. Bullet and shell wounds, gas injuries, all horrific in their nature and so far divorced from what a medical man might see in civilian practice. The RAMC also made huge inroads into disease prevention, something the Army had to accept needed to be dealt with.

The book is a fascinating collection of facts about what took place in 1914-18. Today I work for Public Health, so was particularly keen to read this book. I was pleased to review and verify the facts of the story of the Doctors in the Great War. It is a book that has an easy-to-read style with sufficient detail to explain the various stages in the medical services during the war. It does paint a very clear picture of the challenges and victories won by the hard-pressed medical profession to change the way medical services were utilised then, and to provide a fit for purpose legacy for future combatants. I have no hesitation in recommending this book to anyone with an interest in the medical services and the Great War. The book is referenced in detail and contains excellent photographs to illustrate the changing face of the medical services during the war.