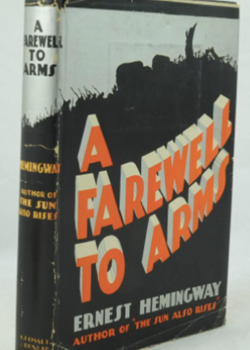 Considered to be the high priest of modernism, it could be argued that Hemingway transformed the face of literature. Prior to the release of his debut novel, the literary stylings dominating the publishing industry were those of unnecessarily verbose and ‘flowery’ Victorian authors. However, in 1918 Hemingway went to war. While volunteering for the ambulance service in Italy, he was wounded and became twice decorated. Out of this experience came A Farewell to Arms.  A semi-autobiographical work, the novel captures the harsh realities – and banalities - of war, as well as the pain that lovers endure while caught in the inexorable sweep of warfare.

A cynical insight to the First World War, A Farewell to Arms follows Frederic Henry (known to most as ‘Tenente’ which is Italian slang for ‘Lieutenant’), a young American volunteering as an ambulance driver for the Italian Army after being rejected by the American military. The narrative is driven by his escapades, the majority of which he is indifferent towards, such as recalling that ‘only seven thousand died from [cholera] anyway’ and his escape from execution by diving from a bridge. Tenente’s indifference to these events which cause the reader great anxiety, and a rush of adrenaline illustrates his acceptance of what cannot be changed, the circumstances of a solider in war.

Hemingway’s reason for displaying this indifference is to condemn war, and to highlight the mundane aspects of war, rather than glorifying war like the poets and novelists of the previous century. He draws attention to meaningless conversation, the lack of information provided to those actually fighting and the endless red tape that soldiers were privy to. Within this, we are provided with an insight to the developments of industrial warfare and a view to how these developments have caused an influx in damage hitherto unseen and unrealised. One aspect of the novel which highlights this is the heavily featured European railway system, which was brand new at the time. He uses the example of the railway to convey that within 12 hours a soldier could travel from the battlefront to a luxury hotel; a damnation of the vast contrasts of industrialisation.

Readers succumb to the hyper realistic and unromanticised account of war provided by Hemingway with brutal honesty as they experience a multifaceted view of a wartime environment. Through this narrative, rather than that solely from the front line, or through the windshield of the ambulance, Hemingway provides a new depth to war stories; that of drunk soldiers, and those in the throes of love.

The love story between Tenente and Catherine Barkley, amongst the horrors of war, is indicative of the journey of self-development that young soldiers unknowingly embarked upon during the First World War; something that would impact these young men for generations to come. This was my first time reading any Hemingway. Despite his reputation as misogynistic, I found Catherine to be sculpted as the archetypal modern woman in the 1910s. A feisty and intelligent nurse, she expects the same from her lovers, in terms of intimacy. Having previously lost her fiancé to war, she is very aware of the fact that soldiers are destined to either die or survive as a bitter veteran. This realisation influences her relationship with Tenente, reflected in the extreme push and pull between the pair as he struggles to match her level of maturity.

Hemingway famously said that he rewrote the ending to A Farewell to Arms thirty-nine times to get the words right. The themes of love and loss are used concurrently, both separately and as one entity. In the final chapter, as Catherine’s health declines, Tenente brings the war to his consciousness and attempts to draw on casual language as he did when his comrades were killed in battle. However, he cannot do this because his love for Catherine has transformed his cynicism and he now calls to God to save Catherine, because she – and love – are his religion now. 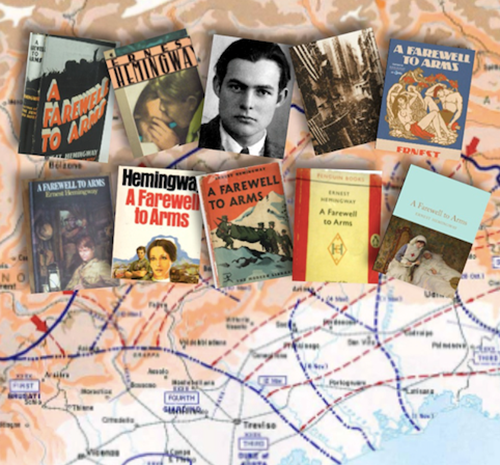