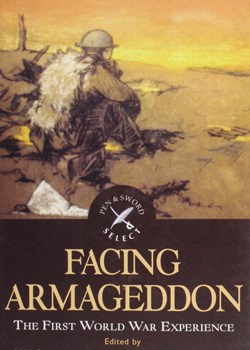 Pen & Sword deserve high praise for producing a new edition of the now judged classic of. It is the work of ‘proven’ historians, including John Terraine, Gary Sheffield, Martin Gilbert, Richard Holmes, Peter Simkins and John Bourne as well as international contributors from countries where the battles were fought and foreign occupation was the wartime experience.

Contributions cover the Great War in all its breadth and scope: from the commanders to soldiers, resistance movements, medicine and the arts, propaganda and post war experience.

The opening page states - This book is dedicated to the memory of all the known and unknown warriors, the willing and unwilling participants in the First World War – it is a fitting tribute.

At £16.99, and despite somewhat small print this is a work which deserves a place in the shelves of every reader of books on the Great War. It can also be purchased in Kindle edition for £4.99.