Farnham in the Great War by Maurice Hewins 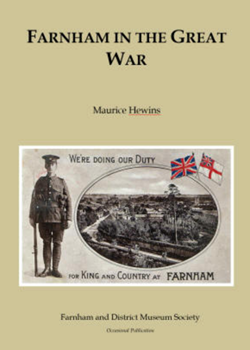 Printed and bound by Print2Demand Ltd.

When I was asked to read and review Maurice Hewin's Farnham in the Great War I jumped at the chance. Having struggled myself to produce a history of the men of Rowledge who fell in the Great War, I knew only too well that the source of material for any work relating to that period was limited and had likely previously been fully explored by Bill Ewbank-Smith for the first two short chapters of his 1983 book, Farnham In War and Peace.

The second part of the question is easier to answer than the first. Maurice's book is a wonderful and comprehensive narrative of the period 1914 to 1919 and indeed leaves us in no doubt about the increasing conflicting and debilitating circumstances that challenged life in and around Farnham for the period and beyond. It takes us way beyond those thirty pages in 'Farnham in War and Peace' in understanding the period.

The reader is left in no doubt about the privations brought about by food shortages and eventual rationing. As the war progressed the effects of the constant demand for fighting men is described well, particularly in terms of conscription and tribunals and the need for women and older boys taking over the roles of those who left to fight. We become aware of the issues brought about by billeted troops in the area and the strain these brought to the community and its resources.

The progressive development of the Labour movement during the period is covered with pressure to gain representation on various bodies. Away from the main themes, Maurice has included some wonderful anecdotes - many relating to traffic offences.

Maurice has clearly spent many hours researching this book and so for me, this has paid off. Throughout he uses quotes from the diaries of George Sturt to bring an ambience to the period which is pertinent because these are the contemporaneous jottings of a very astute observer.

To come back to the first part of my question, has Maurice now achieved that detailed history hinted at by Bill Ewbank-Smith in his Farnham in the Great War?

I suspect that between Bill and Maurice there are now no unexplored archives of the period, Maurice's book has in my mind easily produced a comprehensive, detailed and very readable history of Farnham in the Great War. Apart from the narrative, the book has many wonderful images and archive excerpts which help bring it to life.

We tend to see the Great War in terms of the fallen. Maurice set out to go way beyond that and "unearth a little of the surprising story of Farnham's part in 1914-1919". I believe he has achieved his aims and in so doing given us a great insight for us and future generations into those traumatic years.

Photographs and more in this 2015 event 'Villages' sacrifices recalled in community event'.