Filming All Quiet on the Western Front by Andrew Kelly 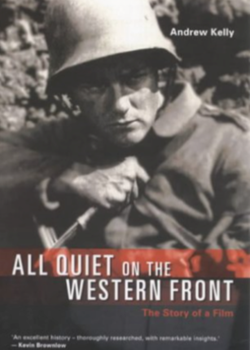 Erich Maria Remarque's extraordinary novel All Quiet on the Western Front invariably leaves a deep and lasting impression. 600,000 copies were sold across the world within three months of its publication in January 1929. Though not the first war film to be made, Lewis Milestone's film of the book had a similar impact on audiences when it was released in 1930. Here, Andrew Kelly recounts the complex story of the making of the film and its extraordinary reception, most notably in Fascist Germany where its anti-war message was regarded as an affront to Nazi ambitions

Of particular interest in this book are the descriptions of the preparations for filming: the sets consisted of a trench system and a ruined village built at Universal Studios; a battlefield was recreated at a ranch 66 miles south of Hollywood where fake shell-holes were blasted with dynamite and filled with muddy rain-water. The studio purchased 250 genuine uniforms and field accessories, complete with rifles, bayonets, gas masks, spades, entrenching tools and cooking utensils. So authentic was the film set that no sooner was it ready than the Chief Sanitary Officer of Orange County closed it down as being too dangerous. Even when it was declared 'safe', the set cost at least one life and very nearly another, when an extra fell on 20 pounds of buried dynamite.

Like the novel, the film is extremely grim, very dark and rather Gothic, perhaps too much so for many English tastes. The NCOs are sadistic, the battle scenes grotesquely violent (though a tourde-force of camera work and technical production). But perhaps the real story of the film lies in its release and subsequent banning. In 1964 Milestone spoke angrily of the 'brutal cutting' - indeed, in no country was the film allowed to remain uncut; particular scorn and vilification was heaped upon it in Nazi Germany. This book is not just for film buffs; it is an informative and illuminating guide to the book, the film and the painful aftermath.

[This review this appeared in the April 1999 edition of Stand To!]