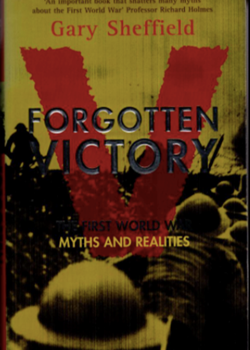 Although published last year, lack of a publisher's copy has sadly long delayed the review of Gary Sheffield's Forgotten Victory in Stand To!

Fortunately, apart from his 'day job' - Warfare Historian on the Higher Command and Staff Course - he is well known through his regular, and effective, expositions of revisionist views at Western Front Association meetings and many members are already aware of the book.

Gary's objective is to 'address the historical amnesia' and the partialism - both through deliberate pose and lack of research - which has rendered the Great War 'a disaster' in the public mind and blanketed both its massive significance and the victories which maintained our freedoms. It was not, we are reminded, a war of poets, fought only by the disillusioned, led simply by the uncaring and the unprofessional. Above all Forgotten Victory provides the balanced revisionist overview of most of the key aspects of the Great War using a wide range of recent academic thinking and study. As well as the myths of futility and the rights and wrongs of the war, his analysis ranges from Haig to an overview of campaigns (before and after the crest of the learning curve which led to the British Army's final victory).

Quite apart from the overall scope of the book - effectively a continuum of efficient and digestible essays Sheffield's exposition on the origins of the war is a clear synthesis of the facts.

Throughout Gary places Britain's role and actions in context, whilst recognising and measuring the contributions of its allies and the abilities of the enemy. The challenging, 'popular', and highly effective text (supported by lengthy notes and references, a reading list and a useable index) places Forgotten Victory Army). amongst the most important books to have been published on the Great War for some years. Whether it will change public opinion is another matter, but when (in the distant future) the ruler of history - and not weight of emotion - measures the Great War, I feel sure that Gary Sheffield's views will be firmly amongst those which predominate.

[This review first appeared in the journal of The Western Front Association Stand To! Issue 65 September 2002. This and other copies of Stand To! are available to read online to members by signing in using their Member Login] 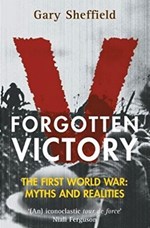