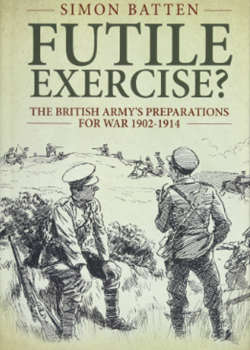 Based on wide ranging research of British Army manoeuvres conducted between 1904 and 1914, this superb book presents a convincing case – that the high command took a serious and close interest in the development, preparation and training of the army for what was expected to be the future nature of war.

Above all, Simon Batten demonstrates that the generals were dedicated and intelligent soldiers, who, despite flaws, had a sound grasp of their profession, were intent on preparing the army for modern warfare and readily tested and adopted fledgling technologies.

Following an overview of the conduct of manoeuvres and their associated difficulties, four chapters consider those undertaken between 1904 and 1914. Three – the 1904 amphibious landings on the Essex coast, those conducted in East Anglia in 1912 and the 1913 exercise in Buckinghamshire and South Nottinghamshire – are discussed in detail, including aspects of their objectives, planning, conduct, and lessons learned, while an intervening chapter considers the rest. Rounding out the book are chapters on British attendance at foreign army manoeuvres and war, and the BEF at war in 1914 seen against the backdrop of the peacetime manoeuvres.

Batten has a writing style that hums along and maintains the reader’s interest. Demonstrating the breadth and depth of his research, he makes fair and balanced observations and even takes issue with some historians; shredding the fallacy of their pronouncements with sound argument and solid evidence.

Although identifying shortcomings of the manoeuvres themselves and the commanders who participated, Batten sensibly addresses them in the context of the difficulties and constraints they faced and the information available at the time. For example, he takes a more positive view than is usual of Haig’s performance during the 1912 manoeuvres; noting that he relied too much on aerial reconnaissance and was badly served by Allenby’s cavalry.

Central to the discussion are the key commanders – most of whom would play a part in the coming war – addressing their views, relationships, and contributions to the development and preparation of the army for a continental war. Batten’s work reveals that the oft–discussed ‘learning process’ commenced prior to the Great War, transforming the British Army. The author also refutes the criticisms that the army was ill–prepared for war in 1914, rather it was an army trained for the very war that took place between August and November of that year, before the trench stalemate that became the Western Front stifled further space for manoeuvre and the pre–war activities, despite their limitations, served it well, especially during the Great Retreat.

The author offers a perspective of a subject rarely investigated in such depth. He throws fresh light on the Edwardian Army, especially its higher commanders. This thoughtful, deeply researched, balanced and well–presented analysis reveals that those who still persist in ‘the Donkeys’ school of thought are skating on very thin ice indeed. Highly recommended.