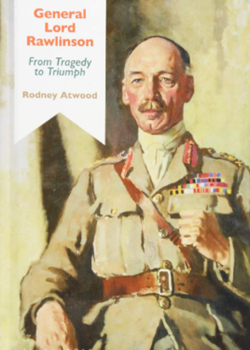 Rodney Atwood’s claim for General Lord Rawlinson: From Tragedy to Triumph (Bloomsbury Academic – available online from £69.00) as the ‘first definitive modern biography’ of Rawlinson is far too bold a claim – despite the book’s outline of ‘Rawly’s’ pre and post–war service.

In my book, Prior and Wilson’s highly regarded Command on the Western Front: The Military Career of Sir Henry Rawlinson 1914–1918, (1992) remains the definitive work on the man and his war. (And copies are available on Amazon from £15.00!) Atwood’s bibliography notes extensive use of Prior and Wilson and Rawlinson’s personal papers which highlights the danger of over–dependence on a subject’s own and the errors therein. In chapter 6 he notes Rawly’s comment that following First Ypres, there had been ‘…a clean sweep of Brigadiers in the VII Div [commanded by the enigmatic Major General Thompson Capper] – all have gone’. This is simply not so. One, Ruggles–Brise, (20 Brigade), was wounded in November 1914. ‘Swanky Sid’ Lawford (22 Brigade) commanded his brigade until August 1915 (becoming acting commander of the 7th Infantry Division) while Watts retained command of 22 Brigade until late September 1915.

Although the authorship is crisp and clear, this book offers us little new material regrading Rawlinson’s Great War achievements that has not appeared in previous analyses.