Givenchy in the Great War – a Village on the Front Line 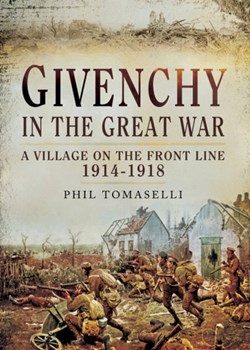 I am sure many reading this review will have visited Givenchy - lying as it does in a central part of the British line and close to the scenes of major engagements. Givenchy in the Great War is possibly the first study of a single geographic location during the war.

The author’s focus is the village - mentioning other places only so far as they concern the central subject. The level of detail is excellent and Phil Tomaselli has used his extensive researches amongst published and unpublished archives to good effect.

The course of the narrative takes the reader from the early 1914 days of the Indian Corps ‘plugging the gap’ through to the desperate defence of the village by the 55th West Lancashire Division (with whose memorial many of us will be familiar) and the scientific warfare of 1918 via the appalling mining war of 1915-16.

Any reader will almost certainly have ‘their’ favourite unit mentioned – Givenchy was that sort of place. Actions which gained VCs are outlined, with brief biographical detail of the recipient. Of particular interest is the fighting around the Red Dragon Crater, the underground war of the time, and the topographical information provided throughout is fascinating.

Unfortunately, the index is limited and while a bibliography is provided, sources are unreferenced. Given the bewildering array of units which passed through Givenchy, some Orders of Battle would not have gone amiss. The concept of concentrating on one village certainly works as an illustration of the war in microcosm.

The author illustrates that an area which was to all intents and purposes a backwater for much of the war was never quiet: men did remarkable things every day.

Poor editing and proof reading – erroneous unit designations and repetitions which I suspect can be laid at the door of the publishers - detract from what is otherwise an enjoyable, at times moving, work book by an author who certainly knows his stuff. 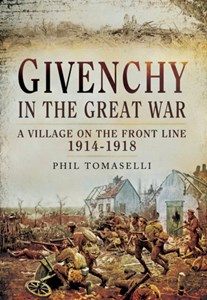