Goodbye to All That by Robert Graves 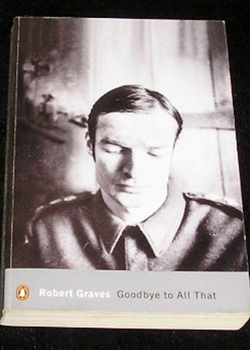 Perhaps better known as a poet and writer of historical fiction – notably I Claudius – in 1929 Robert Graves wrote an autobiographical account of the first thirty years or so of his life. Although Goodbye to All That deals with Graves’ early life and the ten years after his demobilisation, these minor sections are really just book-ends to the majority of the text in which the writer describes his service as a junior officer in the Royal Welch Fusiliers during the Great War.

Based on a book that Graves started, but did not finish, in 1916, Goodbye to All That tells the story of Graves’ time on the Western Front. Although written in chronological order in the style of a diary, it is not a dry, mechanical chronology. The author has a lean prose style that is very readable. Surprisingly perhaps for a poet, unnecessary literary flourishes are absent. Graves is reflexive without being becoming mawkish. He encounters a variety of other literary types during his time in the trenches, Siegfried Sassoon being not the least of them, but he does not allow these characters to overshadow his narrative.

Although Graves’ battalion was involved in both the Battle of Loos and the Somme, military historians should look elsewhere for detailed analysis of these actions. What Graves offers is a rich diet of insights into the life of a junior officer in the Great War. One of the strengths of Graves’ work is the fact that he volunteered immediately war broke out and served throughout the conflict, although wounds limited him to home service in the last two years of the war.

Graves touches on subjects such as the resilience of regimental esprit de corps despite having to constantly rebuild shattered battalions and embrace the New Army formations; the impact of SS 143, which Graves describes as ‘perhaps the most important War Office publication issued during the war’, which devolved tactics to platoon level; and what motivated the men who in his platoons and companies – probably not patriotism and certainly not religion in Graves’ view. The book also has a resonance with life in Britain today. In March 1919 Graves contracted, and survived, Spanish Influenza.

The blurb on the back cover of my Penguin Modern Classics edition of Goodbye to All That asserts that Graves’ book is a ‘classic war document’. There may be more than an element of publisher’s hyperbole in that statement. Nonetheless, Goodbye to All That does feature in the Top 10 that appeared in the April edition of Trench Lines so there is clearly a body of support for this book. It certainly deserves its place on the bookshelf alongside the regimental histories and battle studies. Graves’ candour as a biographer, his eye for the mundane yet important details of trench life and the urgency of his narrative all make Goodbye to All That a rewarding read.