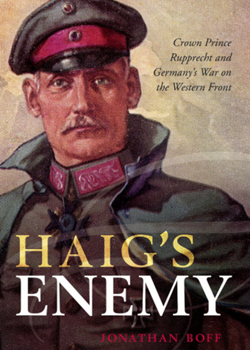 (This review appeared in Stand To! 114 May 2019. The journal of The Western Front Association is published three times a year. It is sent to all members, or can be received digitally. Members have access to the archive of 115+ editions via their Member Login).

Those who have read Jonathan Boff’s Winning and Losing on the Western Front will be aware of the very high quality of his scholarship. Beautifully written, in 300 pages this work presents a first–class guide to the way the war was fought from the German perspective.

The author ranges widely, not only to provide both an excellent description and analysis of events, but also an insight into the tensions between the different contingents of the German Army. He also tackles the rivalries that beset the higher command throughout the war as it sought to react to Allied initiatives authoritatively. Throughout, Rupprecht is shown to have been motivated strongly by his sense of duty. This characteristic stood him good stead when he found himself in sharp disagreement; first, with some of Falkenhayn’s handling of the first half of the war and later when, as an army group commander, he had to cope with Ludendorff’s constant niggling and bullying interference in his own and his subordinates’ commands.

The tendency of the various levels of command to report what they thought their superiors wanted to hear is well covered, as is the gap between the much–vaunted principle of Auftragstaktik – under which superiors defined the mission but left detailed implementation to their subordinates – and the reality of increasing use of centralised direction of operations as the war went on, which was adversely commented on both at the time and after the war. Inaccurate reporting–badly affected the quality of the subsequent staff work and heavy–handed direction from above removed the flexibility with which the man on the spot was meant to carry out his mission.

Boff quotes General von Gebsattel, commander III Bavarian Corps, on the subject of false reporting (p.258) although, it is interesting to note, von Kuhl, Rupprecht’s long–time chief of staff, criticised Gebsattel in a diary entry for 2 October 1916 because he had ‘spun a yarn’ to Rupprecht over the need to pull back to depth positions!

As part of his research Boff read Rupprecht’s voluminous handwritten diaries and compared them with his later published diary. This extraordinary effort throws up a number of points of interest, including the fact that post–war, Rupprecht adjusted his attitude to the use of poison gases to enable him to appear more disapproving of their use than was the case. It is, however, fair to note that he made only sparing use of this type of subterfuge, despite the fact that the very publication of his edited diaries was in response to post–war criticism of aspects of his performance.

The only slight reservation about this otherwise excellent book is that the reader is not much closer to Rupprecht the man at the end than the beginning. This is unfortunate but, as Boff himself notes, he was, perhaps more to be admired than liked. In any case, at this remove, and given the rarefied royal background from which he sprung, it is perhaps unsurprising that instinctive reserve meant that he left relatively little in the way of a personal trail to be followed and exploited.