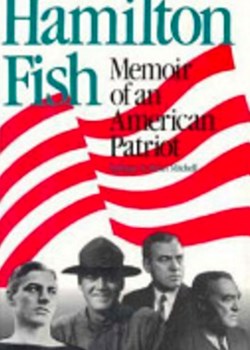 This review by 'Gunner' first appeared in the Western Front Association magazine Stand To! no.35 Summer 1992.

The author was a politician who served as a white officer in the black 369th infantry the 'Harlem Hellfighters'  – in the USA and on the Western front. In a frustratingly short chapter he tells us how he used his inference to get his regiment moved up from the deep south and how, up north, he had to issue live Ammunition to his black soldiers to defend themselves against a threatened raid by a nearby Alabama national guard unit. In France the 369th at first were used as stevedores which caused considerable offence. After some agitation, they were sent up the line but as American law apparently forbade the stationing of armed black troops alongside white soldiers, they served with the French army. They Acquitted themselves well and Fish won the silver star. After the war he resumed his political career and played a leading role in founding the American Legion, and in establishing the US Tomb of the unknown soldier.

Fish championed minority groups, and became seriously anti-red; presumably Reds did not count as a minority. Hamilton Fish came out strongly against American intervention in World War II and much of his book is taken up with accusing President Roosevelt of trying to drag America into it. His hatred of FDR permeates his writing and makes unpleasant reading for anyone who remembers what a good friend the president was to us in our darkest hour.

His detestation of communism made him slightly less anti-Nazi than might otherwise have been the case. He was certainly naive when, on the eve of war and after years of appeasement, he still thought that Hitler could be trusted. Whether or not America's interests were involved in the war, it is salutary  to remember that without her involvement, it would have ended with a Europe dominated by either the communists or the Nazis. Who can doubt that the post war West, even with the Cold War, was a better place thanks to America coming into the war?