Hampson’s War. A Medical Officer on the Western Front. 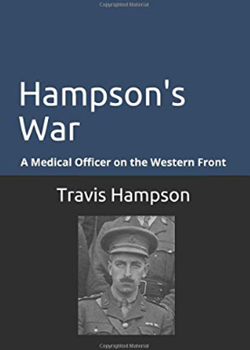 This book has been edited and placed in print by Travis Hampson's grandson. A lot of it is an almost daily diary from a medical officer initially there from the start, struggling to get kit, who is attached to 19th and 20th Field ambulance. He stops keeping a diary just before Loos and completes things with shorter narratives in 1951. I learnt quite a lot about the establishment of a field ambulance, initially horse drawn and later on partially motorised (horse could go to more places). A fascinating part of the diary is noting how little the forward troop knew about the first encounters at Mons, the retreat and then Germany's retreat to the Aisne.  It shows how in this case there was a smaller picture. Personal thoughts and gripes are there from a special reserve officer , with pre war experience who is paid less than new recruits. His thoughts about promotion and failure in gaining command are seen. He seems to be somewhat protected after his initial experiences , including the loss of some medical pals through shell fire and moves into the rear areas from 1916. His account is serious, he is strict and disciplined but there is some humour. I would certainly recommend this book to those with a medical interest but would feel most would gain something from it, there are multiple interesting photographs. I note it is an Amazon Publication which may be of relevance to many of us, it seems print on demand and may be an easy and inexpensive way to publish. Some would prefer better quality but it is similar to other such print runs.