Jack and Hopit: A Cavalryman and his War Horse in the Great War 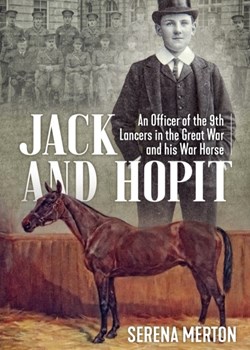 Jack and Hopit: A Cavalryman and his War Horse in the Great War

This was sparked discovering Hopit’s impressive memorial, engraved with his battle honours, a few miles from his master’s much later one.

Jack Colvin left no description of his wartime experience, but the regiment’s war diary and other records allowed Merton to follow his career. After only one engagement fought as cavalry they continued as mounted infantry, “with very little mounted about it”, according to Captain Francis Grenfell, VC. A query as to one detachment’s identity - “Is that the West Riding?” got the answer, “No, it’s the bloody 9th walking!” which became the regiment’s slogan for the rest of the war. Colvin won the Military Cross, was wounded, but returned to the regiment as General Plumer’s ADC in Cologne. The book covers the action and Jack’s later distinguished career with clarity. It is nicely produced, copiously illustrated and will be relevant to anyone interested in the regiment and its horses.