Joffrey's War: A Sherwood Forester in the Great War 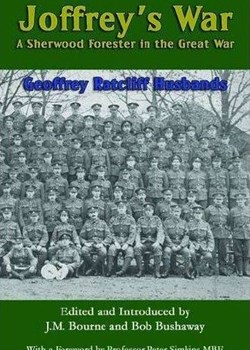 This book is probably one of the most valuable personal accounts of life as an infantryman in the Great War to have ever been produced. Had it been published when it was written, in the 1930s, it would by now rank alongside Old Soldiers Never Die and Goodbye to All That. But in certain respects it is superior to both of these: it tells (in a detail these and other memoirs cannot come close to matching) of the experiences of the BEF's ‘citizen army', with as much emphasis given to training in the UK as front line warfare.

Geoffrey Husbands ("Joffrey" of the title of the book - this was his nickname) was a well-educated young man who joined up slightly under age as a Kitchener volunteer in the 16th (Service) Battalion, the Sherwood Foresters (Chatsworth Rifles). He served with this battalion until October 1916 when he was injured. Upon recovering from his injuries he saw further front line service in 1917 and 1918. This memoir, which is based on his diaries, reveals in superb detail the life of a ‘typical' infantryman, from enlistment and training to his service in France from 1915 to 1918 and his various periods of convalescence.

Without resorting to a hackneyed re-telling of ‘my war', Husbands' narrative of his war service is truly outstanding in its richness. He describes the friendships he makes and the relationships with those he fails to ‘rub along with', as well as the good, bad and indifferent leadership he encounters. He does not hold back in distinguishing between the men who ‘tried their best' and those who did not. Although he tells us of his friendships, the tales of those he dislikes are even more interesting: the anecdotes he tells of one Commanding Officer, Lt-Col Millward ("Legs Eleven" to the men) and his first Company Sergeant Major "Lardy" Miller are wonderful. The stories of these and other characters are a joy to read.

On every page there is a beautifully told anecdote, a cameo of the war that is revealing, or a character ‘brought to life'. It is difficult to identify any aspect of the war that he does not talk about. He covers subjects including food, discipline (including an execution), camps and estaminets, morale, songs and verse, recreation, billeting, training, medical facilities, bombardments and trench conditions. These examples (and there are many other subjects he talks about) is why this book is so important: it allows us to ‘get inside the mind' of an ordinary soldier of the BEF.

The editors (who are both very well known to WFA members) have done a great job in adding explanatory footnotes to the narrative which helps the modern reader to understand some of Husbands' more oblique references. It is also refreshing to read an account which - although chronological - is not in the format of a diary.

This book works on a number of levels. Most simply it is a superlative narrative of a soldier's service. It is important for those interested in operational history as it gives a level of observational detail into trench warfare that is hard to match. For those interested in social history, it is fascinating to read about life (both in the UK and in France) in the war period; his interpretation of regional dialects is just one interesting aspect of this ‘social' history. The memoir is also a valuable supplement to two battalions' histories (16th and 1/8th Sherwood Foresters - being two of the units with which Husbands served) and is useful as a comparison between New Army and Territorial battalions. The book can also be a useful companion for battlefield visits: the author's footsteps can be retraced and visits to the graves of those he describes can be made.

Unusually for memoirs, Husbands uses the real names of his comrades, and the editors have done a sterling job identifying most of these nearly 400 individuals, and recording their fates; there is a section (‘Personalia') containing potted biographies of these men.

This memoir is, in this reviewer's opinion, something that should be required reading for GCSE/A-level students as - to coin a phrase used by John Terrain - it gives the "True Texture" of the war.

The foreword, by The Western Front Association's President Professor Peter Simkins, which is enlightening as a stand-alone essay, ends "...[this book] as a detailed memoir of life and service in the British Army in the Great War is certain to rank among the very best one is ever likely to read." This is a sentiment I wholeheartedly endorse, and would add that if you buy only one book this year, this should be it.

Edited and introduced by J M Bourne and Bob Bushaway, with a foreword by Professor Peter Simkins