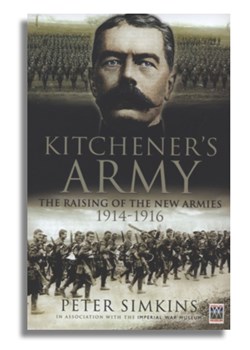 [This review by Gary Sheffield first appeared in Stand To! No. 25 Spring 1989]

Peter Simkins will be well known to many readers of Stand To! as the Historian at the Imperial War Museum; many students of the Great War, including this reviewer, have benefited from his extensive knowledge of the New Armies.

Mr Simkins has researched into the subject over a number of years and in Kitchener's Army has made excellent use of a very wide range of primary and secondary sources.

The first is a political, social and economic survey of the raising of the mass volunteer force.

The second is a study of the New Armies from the point of view of the ordinary soldier or unit.

He has drawn upon a vast amount of evidence, including many contemporary diaries and first hand accounts and covers such topics as experiences of enlistment, the problems of coming to terms with the army and the provision of weapons and uniforms for the newly raised force.

His canvas is actually slightly broader than his title might suggest, since he also touches upon the expansion of the Territorial Force which, he demonstrates, suffered from many of the problems and shared many of the experiences associated with the raising of 'Kitchener' units.

Only a few of the many good things to be found in Kitchener's Army can be mentioned in a short review. Of particular interest is Mr Simkins' assessment of Lord Kitchener's role in the raising of the forces that bore his name. Kitchener is given credit for his foresight in recognising that Britain needed to prepare for a long war, but his shortcomings are not overlooked.

The impact on war industries of the sudden exodus of significant numbers of workers bound for the recruiting station, and the chaos they found when they arrived there can both, Mr Simkins believes, be in part ascribed to the fact that Kitchener 'tried to do too much too soon.' Kitchener's Army also helps to correct the general emphasis on the 'Pals' battalions and other units raised locally, by paying due attention to the large number of 'Service' battalions raised by the War Office: 250 of the latter units were formed compared with 215 locally raised battalions.

Throughout the book, Peter Simkins displays a formidable grasp of the sources and the military, political, economic and social history of the period. This volume goes far beyond the author's stated intention merely to 'fill some of [the] gaps in the historiography of the First World War'; Kitchener’s Army is a major work, undoubtedly one of the most important monographs on the British Army to appear in recent years. Mr Simkins is to be congratulated upon his achievement on producing a scholarly, well documented but readable (if pricey) volume and Manchester University Press are to be congratulated on bringing the fruits of his scholarship before a wider audience.

[This following, subsequent review by Bob Butcher first appeared in Stand To! No. 29 Summer 1990]

Sub-titled 'The Raising of the New Armies, 1914-16', this is THE definitive work on the subject by the IWM historian, Peter Simkins. It was very favourably reviewed in ST/25 by Gary Sheffield whose only criticism was its price, a defect now put right by the appearance of this more modestly priced edition. All I can add is that on comparing the book with the review, I whole-heartedly agree with the latter.