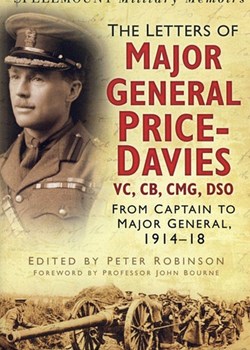 Major General Price-Davies Price-Davies, awarded the VC during the Boer War, was comfortable, middle class and well connected (his brother in law was FM Sir Henry Wilson). He landed in France less than two weeks after war broke out. Peter Thompson’s meticulous research covers his service throughout the war quoting extracts from his diary, letters to his wife and to Wilson.

Despite a good education Price-Davies dispenses with punctuation, making the text a hard read, although the detail is worth the effort. In covering the war chronologically the book allows understanding of the maturing of those commanding the British Army as it evolved from the regular and reservist force of 1914 to the conscripts army of 1917.

The first entries reflect the chaos of an army under severe pressure and suffering enormous casualties –notes reveal what happened to those known to Price-Davies and confirm the huge number of officers killed in the early months of the war. The pressure on the officer corps - trying desperately to ‘make do’ with whatever resources available - emerges in Price-Davies reflections of failure in his diary entries and the letters to his wife.

Those with more than a passing knowledge of the Great War will find much to confirm the view that the raw, volunteer army of 1916 was kept in the dark but that the men Price-Davies lead and commanded were outstandingly brave. The enormous pressures on officers is a recurrent theme and Price-Davies reveals his innermost thoughts to his wife during the dark days of the Somme. Long periods in the trenches cause intense weariness, fatigue and the understanding that Price-Davies needed to lead by example and do his best for his men.

Throughout, the writer’s attention to detail - and his enjoyment of a good meal – are underlined, while the hundreds of notes at the end of the entries for each year reflect him as one of the best connected men in the army. The first entries reflect the chaos of an army under severe pressure and suffering enormous casualties –notes reveal what happened to those known to Price-Davies.

The confusions of the early phases of the war evolve into the competency that underpinned British army in 1917; at the very end of the war Price-Davies leaves the Western Front to become a liaison officer in Italy – promoted by Wilson who wanted his own man in the theatre.

As a serious study to the evolution of both the officer corps and the British army during the Great War, this is a valuable resource. Not an easy read but, for the purist, an important addition to the library.