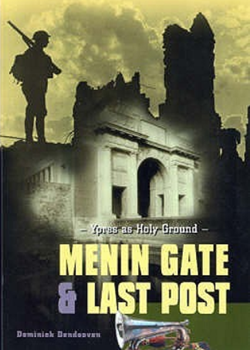 This year, 2002, the Menin Gate has celebrated its 75th anniversary - it was inaugurated on 24th 1927. This book is therefore a timely reminder of how the Gate came into being, and also tells the story of the Last Post buglers since they first sounded the famous call on the day of the inauguration, making such an impression on the local police chief that he decided to make sure that it could be sounded regularly. The first Last Post ceremony was held a year later, at half past eight on the evening of Monday 2 July 1928.

From now on it was a nightly event; in September 1929 four silver trumpets were presented, having been donated by Belgian branches of the British Legion. The Last Post Committee has continued the work ever since (except for four years during the Second World War: it is believed that it was probably on 20 May 1940, a week before the fall of leper, that the bugles fell silent, until 6 September 1944 when the city was liberated. That evening the Last Post was played once more, as the retreating Germans were still only two km from the city walls).

The siting and building of the Gate itself are fascinating areas to explore. The huge memorial was not approved of by all - Churchill, for example, had wanted to retain all of ruined 'Wipers' as a monument - but the inhabitants came back and wanted the city rebuilt. The development of Reginald Blomfield, the architect's ideas are discussed in detail, as are the Menin Gate lions, and the gradual development of the panel designs and inscriptions.

Full of interesting detail and many illustrations which I can guarantee readers will not have seen before, this is a fascinating account; pilgrims to the Gate each evening, whether on a hot summer's day or in the fog of a Flanders winter, will find the experience richer for having

[This review by the editor of Stand To! at the time, Ann Clayton first appeared in the Stand To! No. 63 January  2002 as the Editor's Choice. Members receive the magazine three times a year and have access to the online archive of over 100 editions. Members also receive our in-house magazine Bulletin three times a year.]