Miners at War 1914-18: South Wales Miners in the Tunnelling Companies on the Western Front 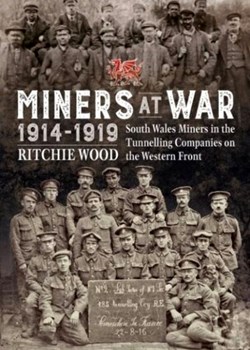 Although the large mines at Messines and the Somme are well-known, it is only recently that researchers have realised the extent of mining on the Western Front. It was only really absent from areas where a high water-table or unsuitable geology rendered it technically impractical.

With many years of experience as a mining engineer, Ritchie Wood brings an expert eye to the underground war. Following a description of 19th Century coal-mining in the various areas of the United Kingdom and their varying techniques, the author follows up with a history of the major Royal Engineers military mining operations in the 18th and 19th Centuries.

It was interesting that Major Norton-Griffiths had encountered the so-called ‘clay-kickers’, his preferred tunnellers, not in the Cornish clay mines, but whilst he was supervising sewer construction beneath the streets of London. However, despite recruitment of appropriately skilled miners from throughout the UK mining industry, the Royal Engineers and miners who had previously joined other units, the focus of this work is not the on ‘clay-kickers’ but those who had previously worked in the South Wales coalfields.

The ‘learning curve’ during early mining operations is followed by an examination of the personal histories of a number of individuals, demonstrating what a dangerous time they had, which may well have justified the six shillings a day that the Army paid to a skilled face-worker (equal to the pay of an R.E. Sergeant-Major)

In providing a detailed description of the work and active service of five of the twenty-five Tunnelling Companies on the Western Front, the author draws much of the information from unit War Diaries.  This is fascinating stuff, and gives a good indication of the daily experience of being part of a Tunnelling Company.  As with many small units, in which highly specialised skills were a major factor, discipline tended to be less formal than in larger units and digging tunnels was far from their only activity. Members of the various units were frequently employed with trench raiding parties - given the task of investigating and destroying enemy mines and dugouts.

Once the mobile war of the Hundred Days succeeded static warfare the need for strictly Tunnelling Companies disappeared and the units found their skills employed in such varied occupations as road repair, constructing new dugouts and neutralising booby-traps and other enemy ordnance - activities that caused as many casualties as digging tunnels.