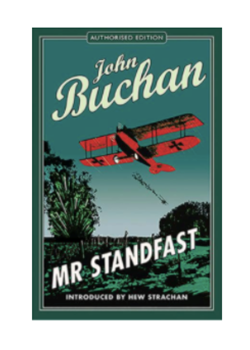 Whilst John Buchan was not a combatant in the Great War, he was a significant figure in the nascent business of propaganda. In 1917 Buchan was appointed director the newly created Dept. of Information and subsequently was director of intelligence in the fully-fledged Ministry of Information. Concomitant with undertaking these roles, Buchan wrote Mr Standfast which is the third novel in a trilogy that begins with the well known The Thirty-Nine Steps followed by the less well-known Greenmantle. Although Mr Standfast was written during 1917 and 1918 it was published a year later in 1919.

At one level Mr Standfast is a spy novel featuring many of the tropes of this genre. These include  a fast-paced narrative that invites a suspension of belief in the reader; a succession of coincidences, although this was not a barrier to the likes of Shakespeare and Dickens; and an omniscient enemy named ‘Mr X’. The references to John Bunyan’s  (Mr Standfast is one amongst a cast of characters in Bunyan’s work) allude to an archetypal tale – a quest fraught with danger.

However, it is the context within which Buchan wrote Mr Standfast that will really interest students of the Great War. In 1917 the British government was becoming increasingly concerned with the impact of war-weariness on the home front, the threat of pacifism in its broadest sense and the pressure for a negotiated peace with Germany. Against this backdrop, Buchan the thriller writer does not neglect his duty as a propagandist.

The opening section of the novel has Buchan’s protagonist, Richard Hannay, in the Oxfordshire countryside contemplating that ‘I understand what a precious thing this little England was, how old and kindly and comforting, how wholly worth striving for’. Buchan also examines the nature of pacifism and pacifist thought as it manifested itself in some sections of society in 1917. He explores the threat of socialism during Hannay’s brief sojourn in Glasgow. Hereabouts, Buchan betrays his Presbyterian roots by suggesting that the worker on Clydeside was more anti-Irish or anti-Catholic and ‘hates Germans first’. By touching on the impact of DoRA and exposing Hannay to an air-raid in London, Buchan demonstrates the extent to which, by 1917, the Great War had become totalised.

Aspects of the text were also modernist. The criminal mastermind Hannay opposes is a shape-shifter in the contemporary vein. One of the agents in Hannay’s small cadre of helpers is young, female and clever. Air power plays a significant role in the climax of the narrative.

In his introduction to my copy of Mr Standfast, The Western Front Association patron Sir Hew Strachan, asserts John Buchan is a ‘master of the genre’. Certainly, Buchan does not suffer in comparison to later spy novelists such as Eric Ambler or Graham Greene. He combines a deep knowledge of the issues of the day with the thriller writer’s knack of drawing in their reader to produce a novel that is a rewarding read for any scholar of the Great War.