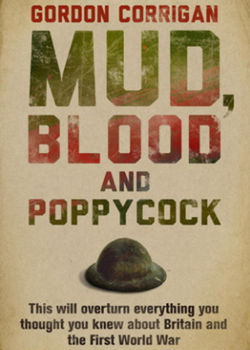 Gordon Corrigan's book is no mere defence of the British military and its command in the Great War. Instead it is another all-arms assault on the Laffinistas and the Clarkists mounted by an author - and a highly experienced soldier - with a command of the anecdote and the obscure. Mud, Blood and Poppycock  seeks to underline views which dissent from the careless-ineptitude school of British Great War history. Gordon Corrigan is a 'donkey walloper', mounting a creeping barrage on views exemplified in the writing of those like Laffin and Clark - who, in an aside, Corrigan notes grotesquely invented the everlasting quote 'lions led by donkeys'. (Although it seems more likely that Clark lied about making up the lie!) One reviewer has criticised the book's title as 'provocative and absurd' and the author's grasp of key facts, particularly in regard to his claims about Haig's decisions to launch the Battle of the Somme and Third Ypres. Regardless, Corrigan's highly readable approach valuably re-examines many key aspects of the nation's involvement in the Great War.

His survey ranges the very decision to participate in a mainland European war to the unreality of claims of a lost - or wasted - generation. From ever improving command and control he moves to examine inaccuracies about 'needless slaughter'. In his autopsy of the half-truths he provides a compendium of little known information about the British Army's structure, military law, and its senior officers. My recent review of Gary Sheffield's Forgotten Victory was dismissed by one amongst the unreconstructed as a mere 'advert' for revisionism. Sadly, positive views on Britain's conduct of the war are even interpreted as disloyal to those who fought and died, rather than a recognition of sacrifice in a just cause for a victory successfully gained. Yet the majority of modern analysis, like Gordon Corrigan's, underlines that the army did not comprise inhumane bunglers or sheep led to slaughter. Whilst Gary Sheffield and Brain Bond have both recently underlined the importance of post John Terraine/Correlli Barnett analysis of Britain's conduct of the war, the reality remains that the British 'public' has yet to be convinced.

The legend of continuous ineptitude has not merely been printed its recipe has been swallowed whole. The revised views should be those that enter the mainstream of popular thinking, although I doubt that they will. But the hope remains that Mud, Blood and Poppycock will become another brick in the growing wall of clearer thinking. Paid up members of the butchers and bunglers school should read such work and reconsider the now unrelenting assault on their positions; the revisionists' emotions are no less real. All ranks of the British Army performed many great things; not least, winning the Great War.

[This review was first published in the September 2004 edition of Stand To! The journal of The Western Front Association. Members receive three issue a year, in addition to three issues each year of our sister magazine Bulletin].