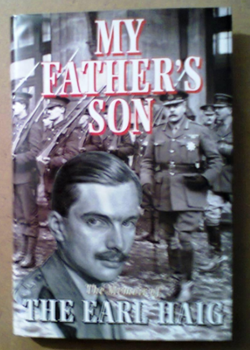 When Earl Haig died suddenly in 1928, his nine-year-old son succeeded to the title. Such was his father's standing that an immense weight of personal obligation and national expectation immediately fell upon Dawyck Haig's shoulders. This, his memoir, first drafted some thirty years ago, provides a brief but perfectly focussed snapshot of his father. He is simply and fondly remembered, as are the fragments of guidance and patient encouragement which he freely gave as a loving and understanding parent so unlike the stern unimaginative soldier of popular biography. Far more My Father's Son shows how Douglas Haig's immense stature - about which his son only became truly aware when the Earl died - provided the nine year-old with inspiration enough to influence much in, and of, his life.

After an immensely enjoyable period at university - balanced by equally undistinguished academic application - Dawyck Haig was commissioned into The Royal Scots Greys in 1939, a genuine cavalry regiment still unburdened by armoured fighting vehicles. Captured in North Africa he duly became one of a small group of special prisoners with 'distinguished connections' to Britain's leadership. Together they enjoyed the special terrors of being held in Colditz Castle as hostages on Hitler's direct orders and threat of death in the event of allied victory. While he was a prisoner, art, previously merely an interest, became both Earl Haig's salvation and his bulwark against the constant threats which hovered over this group of prominent prisoners. On war's end it was to art which Earl Haig turned for his future becoming a student at the prestigious School of Arts and Crafts, Camberwell.

Dawyck Haig has seen his father transfigured from fame to infamy, from hero to villain. Only in recent years he has seen the tarnish of infamy rebuffed by more balanced research. Since the war his own reputation as an artist has grown while he has studiously continued to undertake the wide range of tasks which have fallen upon him simply because his father was Douglas Haig. But, above all else, Dawyck Haig has lived his own life and his memoir is a fascinating reflection of his own talents and achievements.

Review was by David Filsell.

[This review first appear in the April 2002 edition of Stand To! No. 65. This review and the entire archive of Stand To are available to members via their Member Login].