National Myth and the First World War in Modern Music 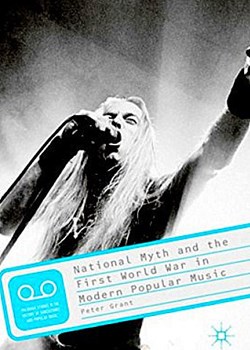 Palgrave Studies in the History of Subcultures and Popular Music

Peter Grant is Senior Lecturer at City University London. He is a fellow of the Royal Historical Society. His previous books include Philanthropy and Voluntary Action in the First World War and The Business of Giving.

Alexa, an A.I and ‘Siri-like’ voice-activate personal assistant will, amongst other tasks, select music from a database of 4 million songs and play them back in an instant (when signed up to Amazon Music). This has proved invaluable, a joy, a revelation and sometimes a ‘laugh out loud’ misunderstanding as I have read National Myth and the First World War in Modern Music by Peter Grant and called out “Alexa: Play ‘The Lonesome Death of Hattie Carroll’ by Bob Dylan”, or “Alexa: Play ‘Paschendale’ (sic) by Iron Maiden” or “Alexa: Play ‘All Together Now’ by The Farm” or “Alexa: Play ‘Let England Shake’ by P J Harvey” or “Alexa: Play ‘One’ by Metallica”

When reading a book in print (my reading is split about 30:70 in favour of eBooks) I recreate the eBook in Kindle experience of creating 'highlights' and 'bookmarking' by littering the text with mini-PostIts. Later, laboriously, I return for a second read-through and dictate notes and quotes so that I have a record of what on the first reading I filtered out of interest. One indicator of my 'engagement' with a book is the number and density of such use of PostIts - with National Myth and the First World War in Modern Music they are as thick like recently tossed confetti. My curiosity is stirred by the multidisciplinary approach and by the additional sensory engagement of the music to accompany my reading : music that is highly varied and often niche to my broad tastes - playing genres I would never choose to listen to and artistes I had never heard of but can now say I enjoy.

I applaud the development of multi or interdisciplinary studies such as this as a necessary and valuable way to shed new light on the First World War and to open it up to a broader audience. There is a caveat, in that this requires, where a subject is scrutinised at an academic level, expertise in more than one subject. Here, woolly history of the First World War would be inexcusable and if your second topic is popular music you need to understand it as a social anthropologist and sociologist - you also need to love, and might I say, 'tolerate' all, and any genre of music, and be able to understand and appreciate it from both the perspective of the listener and the composer/musician.

The perspective on the First World War is that of an author of the 21st century - National Myth and the First World War in Modern Music is manifestly uptodate, accurate and referenced with the 'right' masters of their subject such as Jay Winter, Arthur Marwick and Catriona Pennell. The referencing is something of a joy for students as it is unrelentingly dense which allows the insanely curious to follow up at least some of these. Co-incidentally, reviewing another multidisciplinary tome this week, The Western Front: Landscape, Tourism and Heritage by Stephen Miles, that matches the First World War with human geography, sociology, I find myself for the second time getting my head around the term 'Lieux de memoire' : ‘any significant entity, whether material or non-material in nature, which by dint of human will or the work of time has become a symbolic element of the memorial heritage of any community’. (Defintion courtesy of Wikipedia)

Just as there should be art historians there need to be music historians. I would describe Peter Grant as a ‘Music Historian’: he weaves the two together and writes like a music journalist for NME or Rolling Stone who is applying academic rigour to his writing and referencing.

I have read National Myth and the First World War in Modern Music but not finished with it. This is a 'great read' - a mind-awakening challenge and insight. It is even an introduction to music genres I have avoided until now.

There are some 1,500 modern popular songs about, or inspired by, the First World War, they are generously sprinkled through-out the book as clichés and myths are debunked while the contemporary perspective on national myth, poetry and literature is given.

With some 90+ bookmarks and tags sprinkled across its 303 pages I can see I will have quite a bit of note taking and chasing up of references to come. I am already citing National Myth and the First World War in Modern Music as I am currently completing an MA in History of Britain and the First World War. Many of the authors mentioned are familiar names and Peter Grant has an excellent grasp of how scholarship on the First World War has changed over the decades.

As my notes spill onto the page they will be shared.