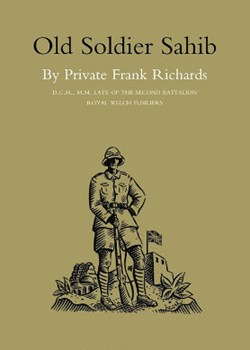 In 1933 the first of two books by Frank Richards was published by Faber and Faber.

It was “ Soldiers Never Die” and is I believe a true classic of literature of the First World War. The second. “Old Soldier Sahib” was considered by Robert Graves to be the better of the two books. This I believe is a matter of personal opinion, both books being to my mind required reading and immensely interesting and enjoyable. Both were edited and “prompted” by Robert Graves, a friend of Frank Richards.

Graves was not a ghost writer or re-writer, the text being Richards own account of his own service in India and Burma prior to the war and his service during WW1 in the Royal Welsh Fusiliers. Many Readers will have copies of both well loved books which they themselves will have read many times. They are classics of modern military literature and are most certainly the best account of the pre war and wartime service by any private soldier.

The difference with these reprints is that they have been annotated by John Krijnen and David Langley in collaboration with Frank Richards’s daughter Margaret Holmes. Each page is annotated to give information on Frank Richards’s friends, his officers, the places where he served in India and Burma, dates, events and the language, for example. Where soldiers are mentioned effort has been made to identify them, officers and other ranks alike. Sadly his great friend, the Prayer wallah is never identified; an impossible task given the lack of clues available.

”Old Soldier Sahib” tells of Richards’s early life and his enlistment in the regiment of his choice, The Royal Welsh Fusiliers, his training as an infantryman, a marksman and signaller. He was eventually to be posted to India and Burma and the book is a lively and very forthright account of life overseas, his duties and postings. He possessed a retentive memory and makes some very pithy comments about his comrades, NCOs and officers. Considering that the book was written many years afterwards, it is for the most part a faithful reflection of the British soldiers behaviour in foreign postings, relations with the native population and incidents at the time.

It contains many photos, some 110 of them, many being new, adding greatly to the interest of the narrative. There are also ten Appendices covering such diverse subjects from Terms of Service to Musketry and Money and Pay. All of which I found added to my enjoyment in re reading the original narrative. Both annotators are to be congratulated in adding further interest and enjoyment to Old Soldier Sahib. I would strongly recommend this wonderful book to all readers.