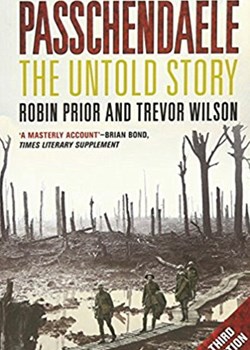 With the publication in 1992 of Command on the Western Front, Robin Prior and Trevor Wilson immediately took their place among the foremost authorities on the British Army of the Great War. Their cool analysis, based on impressive labours in the archives, was far removed from the crude 'lions led by donkeys' stereotypes beloved of popular historians. That book is, quite simply, one of the most important books ever published on the Great War. Its major flaw, as many pointed out, is that the authors said little about 1917. Now they have, in part, filled the gap.

The tone of Passchendaele - the untold story is rather more downbeat than some other recent assessments of the British Army of 1917 - Paddy Griffith's Battle Tactics of the Western Front and John Lee's Introduction to Chris McCarthy's Passchendaele: The Day by Day Account are cases in point. These historians, and others, have argued that the BEF absorbed many of the lessons of the Somme and Arras. From Prior and Wilson's account, the operational and tactical 'learning curve' of the BEF seems distinctly flat. Moreover, they assault Sir Herbert Plumer's reputation as a safe pair of hands. Many historians interpret Haig's decision to transfer the main effort from Gough's Fifth Army to Plumer's Second Army as a crucial moment, which signified the abandonment of attempts to achieve a breakthrough in favour of a step by step approach. Plumer's meticulous preparations led to three successful 'bite and hold' battles (Menin Road, 20 September; Polygon Wood, 27 September; Broodseinde, 4 October). Even Charles Bean, the Australian Official Historian who had no particular love for British High Command, commented on the success of these offensives, while J.E.Edmonds, his British opposite number, claimed that Plumer's successes brought the Germans to the point of recognising their defeat and abandoning the Ypres Salient.

Plumer's reputation, which has hitherto been spared the fate of that of Haig and Gough, is the most prominent casualty of Passchendaele - the untold story. Prior and Wilson make the telling point that Plumer's three ‘bite and hold' battles were individually more costly than Gough's abortive attempt to break through on 31 July, as well as criticising his operational methods on other grounds (for instance, that they only worked on favourable terrain). But as Brian Bond pointed out in his review of this book one may question whether the proportion of casualties to ground gained is necessarily a valid criterion of success. The argument that Passchendaele was a partial success rests largely on the impact of heavy casualties on the Germans, which, it is claimed, damaged their morale, drained away manpower, and led to Ludendorff taking the offensive in the spring of 1918, the Germans being unwilling to passively await another pounding along the lines of Passchendaele. Prior and Wilson argue, quite correctly, that Ludendorff's memoirs, which are often cited in support of this position, are far from an objective and unbiased source. Yet Prior and Wilson pay relatively little attention to the impact of Passchendaele on the Germans. Clearly, this will be a fruitful area for future research.

Perhaps the most controversial conclusion of Passchendaele - the untold story is that Lloyd George's political position was much stronger than has hitherto been assumed. Previously, historians have emphasised the fragility of his position s the Liberal leader of a coalition dominated by Conservatives, and have argued that the Prime Minister could not have vetoed Haig's Flanders strategy without threatening his grip on the reins of power. Prior and Wilson turn this argument on its head. They argue that Lloyd George was effectively unassailable as Prime Minister, and that he chose not to interfere with Haig's strategy; instead, Britain's political elite gave 'their consent' to the campaign. Moreover, Prior and Wilson argue that once launched, Third Ypres 'was eminently haltable', given the military and political will to do so. While political historians may dispute their interpretation of the strength of Lloyd George's hand, Prior and Wilson's attack on the concept of the 'inevitability' of Passchendaele, the idea that once started, the campaign could not be halted, is convincing.

Eighty years have now passed since the events of 1917, and Third Ypres is as controversial as ever. Passchendaele - the untold story is without a doubt the best book on the campaign yet published. It does not answer every question about the campaign, some of its conclusions will be disputed by other scholars, but it is well-researched, well-written, and will keep historians arguing for years to come.

[This review first appeared in the journal of The Western Front Association Stand To! Issue 50 September 1997. This and other copies of Stand To! are available to read online to members by signing in using their Member Login] 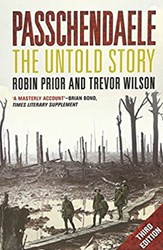