Photographing the Fallen: A War Graves Photographer on the Western Front 1915–1919 by Jeremey Gordon Smith 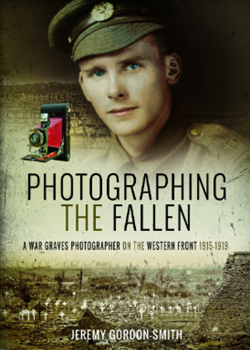 Ivan Bawtree worked for Kodak as a photographer and technician before the Great War. He joined the Red Cross in 1915 as part of the newly–formed Graves Registration Unit (GRU) and went to the Ypres sector to photograph war graves for the Imperial War Graves Commission (IWGC). Bawtree and two other photographers travelled by motorcycle and sidecar, photographing graves and other subjects, until he was demobbed in October 1919. His huge collection of negatives, surviving diaries and letters, has enabled the author to produce a fascinating biography of his great–great–uncle, and of the GRU. The book offers a biography of Bawtree, an overview of his time in France and Belgium and a history of the formation of the GRU. While many entries from his diary are brief – “Go to xxx, photograph graves. Return to base, have hot bath.” – this is a minor criticism.

An outline of the creation of the cemeteries includes the author’s modern photographs interspersed with some of Bawtree’s original shots. Following chapters describes his wartime experiences, those of family and friends and events on the Western Front after the Armistice, describing how bodies were found, exhumed, identified, and reburied.

The book concludes with the foundation of the IWGC in 1917, its activities up until 1938 and a simple guide to the northern section of the Western Front. This is linked to locations Bawtree visited, a chapter about the post–war restoration of Ypres and his life after 1920. It is copiously illustrated with original photographs reproduced in dark sepia interspersed with the author’s own colour photographs, some merged to show a combined ‘then and now’ image. Overall this is an interesting book about a little–known aspect of the Western Front and about the people who recorded it.

[This review first appeared in Stand To! No. 114 February 2019. The journal of the Western Front Association is published three times a year and is available to members in print or digitally. Members also have access to the Stand To! Archive online via their Member Login. The archive comprises some 115 editions, over 1,600 articles and over 2,200 book reviews].