Public Schools and the Great War- The Generation Lost 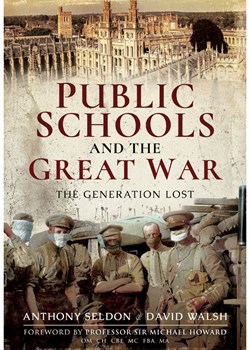 By Anthony Seldon and David Walsh

Published by Pen and Sword 317 pages, including appendix, notes, bibliography and index and 34 photographs.

I remember in the 1960s, how it became very fashionable to denigrate the public schools as out of touch, elitist institutions. As for their contribution towards the Great War, their boys were seen as dim and uncritical patriots who had led their men into muddy slaughter. However, it was just at this time that R C Sherriff, writer of Journey's End, chose to defend the contribution of the public schoolboy in an essay. This was the more remarkable as Sherriff believed he had been initially rejected for a commission, simply because he had not been to the right kind of school.

Once he arrived in France with 9th East Surrey in October 1916 he found himself surrounded by public schoolboys as officers and ended up deeply respecting them. Indeed, the Army's decision to rely heavily on the public schools for officers in 1914 was not irrational. In a profoundly civilian country, their Officer Training Corps provided some military training; and the schools, as Professor Michael Howard says in his Foreword, taught the values of the old gentry: 'Unquestioning obedience to higher authority; care for those under one's own command; and where necessary a readiness to sacrifice one's own life in fulfilment of both.'

Since the '60s, Sherriff's views have been often ignored. The officers in 'Blackadder' are clearly all public schoolboys, and some more sensible criticism has also continued. This book, however, aims to provide a sympathetic but rounded full length study of public schools and the war. The joint authors are both public school masters and experienced authors, although this is their first book on the Great War.

They give the background to public schools in 1914 and discuss their contribution and that of their pupils and staff to the war. For this they consider not just schools in the UK, but also similar schools across the Empire. (Apparently, even as 'democratic' a force as the Australian Army was much reliant on public school boys as officers.) They also consider the impact during the war on the schools; commemoration of the war; the 'Lost Generation' issue; and how views of the war changed, much of it led by former public school boys.

Frustratingly, there seems to be no clearly agreed list of public schools for 1914, and not all schools of that date have survived. The appendix on numbers of pupils serving, casualty rates, etc., has had to be based essentially on current public schools. (Ironically, Sherriff's old school now figures in that list.) The fatality rate for public school alumni was, however, about twice the average of those who served in the war, and particularly high for pupils of 1900-14. For instance, 38% of those entering Harrow in the summer of 1910, died.

As the authors point out, 'Public school alumni dictated the way the war was fought, and suffered a disproportionately heavy toll in its prosecution. They have also played a dominant role in shaping the images, written and graphic, through which the war has been interpreted and portrayed.' Usefully, they identify in each case the public school attended by the very many they mention, not all of whom one would immediately suppose were public school boys.

As Howard writes 'This book should be read by anyone tempted to make instant judgements about the quality of the leadership of the British Army in... "The Great War".' The book is an interesting and well written one, full of often poignant detail, informed by extensive research. Personally, I should like to have seen more about the change to non public school officers and the attempts to inculcate public school values into them. But perhaps that is another story.

David Walsh is a regular speaker at WFA branch events.