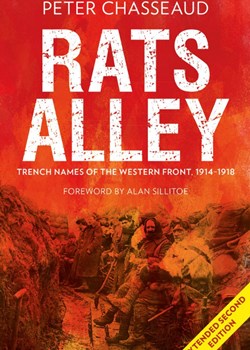 On its first publication in 2006, what the marketing men call the ‘Unique Selling Point’ of Peter Chasseaud’s Rats Alley was simple. In listing the names over 10,000 named trenches on the Western Front, their locations and trench map references, there was no other work of reference remotely like it.

Such is the reputation and importance of the work that it has earned a reputation as a vital reference; one considered so important that - at the time of writing this review – book dealers are listing used copies at prices from a ‘low’ of £60.00 to a scathing £365.00. Good luck with that, for while £40.00 for this second edition of this work is far from cheap (In fact, at the time of reviewing, copies are available on the internet from £20.00) With its list of named trenches comprising 24,000 names and map references, the expanded second volume almost looks a steal for the cognoscenti.

Effectively, the author/compiler has employed all the valuable and detailed information about trench names, maps and their mapping from the first edition of the book – ten fascinating chapters of important facts and background of naming trenches and of trench maps. Entirely new are the codification and map referenced location of an additional 24,000 named trench ‘highways’ and trench lines.

Used paperback copies are currently available for under £8.00 from Amazon or Abebooks; a first edition hardback will cost over £375. (Digital Editor, May 2022)