Riding the Retreat: Mons to Marne 1914 Revisited by Richard Holmes 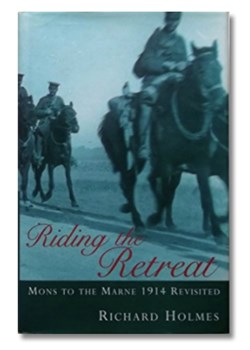 Riding the Retreat arrived in my postbox just as I finished Army Battlefield Guide - Belgium and Northern France by the same author. They are in marked contrast. I have always hankered after riding the Somme on horseback, and I looked forward to some perceptive views on the ground chosen by the BEF during its retreat. However, this ride was more of a fun affair, with the small group of participants enjoying considerably more than their share of the good things in life, and certainly more than those in whose footsteps they followed. I am well aware of the old adage that any 'bloody fool can be uncomfortable', but I must confess to being irritated by the frequent confessions of overindulgence. I hoped for a more serious motive, but don't get me wrong, I still enjoyed the book.

Richard Holmes leaves us in no doubt that he lectured in military history at Sandhurst: we are reminded constantly how wide was his brief at the Academy. Though interesting, much seems irrelevant to the subject. In between the history of long ago and just two years ago (the ride was in 1993), his accounts of the actual battles are full of stirring exploits, making good use of the documentary evidence. He cleverly uses the numerous eye witness accounts to good effect, and with a knowledge of the ground one can easily relive the events which took place eighty one years ago. His account of the stand made by the Norfolks and the Cheshires, and the cavalry charge during the flank guard action at Elouges is truly eloquent. Another excellent example is the way he paints, with considerable skill, the notorious St Quentin incident, with the legendary Tom Bridges as the hero. Unfortunately the regiments of the two transgressing Commanding Officers are transposed. Most importantly, he shows that the BEF was made up of real men, with all their character, foibles, strengths and weaknesses

The maps I personally found only adequate. They are drawn in the style of those found in Craster's Fifteen Rounds a Minute, very decorative but not easy to read. A sop perhaps to co-rider, Brigadier Webb-Carter, also a Grenadier, and who, I am sure, had more than a little to do with the success of the ride.

Finally, yes, I can recommend it as one to buy, but as many of you have heard me say before, 'Never believe everything you read'. One example will suffice. Sir James Grierson was not a bluff Scots infantry officer. A recent article in Stand To! made the same mistake. The Army List of 1914 confirms that Grierson was a Gunner.

One of the most enjoyable introductions to military history and the experience of the British Army in the opening months of the First World War that you will find. Richard Holmes takes the highly personal and somewhat eccentric approach of following the retreat by challenging himself to do so on horseback - as the BEF had done (at least the more senior officers) will have done 80 years previously. The mix of personal account of the challenge with the background to events has you with him, on horseback, riding the most unusual of battlefield tours. Particularly recommended for someone who may be new to military history, the First World War and the Western Front, but packed  with enough detail and commentary for those already with a firm knowledge of the subject.