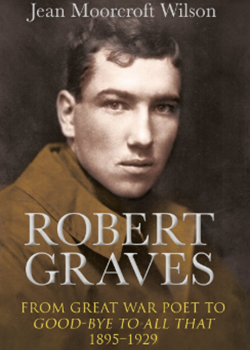 Since 1929 Good–Bye to All That has seen as key work of Great War writing. Whilst others who served with him in the Royal Welsh Fusiliers – Siegfried Sassoon, Edward Blunden and Doctor J C Dunn – have questioned the veracity of the experiences Graves records, the quality and perception of the book’s authorship have ensured continued readership and praise. Nevertheless, it must still be viewed, as Paul Fussell noted as long ago as 1975, as, ‘fiction disguised as disguised as a memoir’.

Graves has been the subject of at least two biographies since 2003; the first by Miranda Seymour, the second by Robert King in 2008. Now, Jean Moorcroft Wilson – author of noted biographies of Siegfried Sassoon, Edward Thomas and Isaac Rosenberg – offers what must surely be the definitive analysis of Graves the child, poet, soldier and author up to 1929 when Good–Bye to All That was published.

As a poet Robert Graves judged that war–induced long–borne mental torments had informed, indeed, aided his work and, like Sassoon, that he was damaged by war seems beyond dispute. In the posthumously published poem ‘A Survivor Comes Home’, possibly written in 1919, Graves underlines the degree to which he – like many authors and poets and soldiery alike – ever remained disturbed by the wartime experiences which, conjecturally, he never entirely overcame.

If I laughed at you, scorned you, no

You flash in my eyes, choke my breath …

This new biography displays both dispassion and elegance in authorship. The author’s deployment of unpublished correspondence and documents enable her to reconstruct the unhappiness of Graves’ youth, of his war, the damage it created in him and his determination to fight the consequences of the conflict he carried into peacetime.

Graves’ awkward nature, frequently inept manners and single mindedness show him as one oblivious to the realities of overstepping norms of behaviour as a schoolboy, officer, author, husband or friend. His sexuality – in reality, it seems, little other than a youthful and unfulfilled public–school flirtation with homosexuality – is dealt with sympathetically.

His creation of an over–confident public ‘front’ created challenges – challenges which he ignored, dismissed or simply forced himself to overcome. Integral is Moorcroft Wilson’s evaluation of the failure of his first marriage, the long saga of his relationship with the complicated – some might judge raving – Laura Riding with whom co–habited and collaborated in writing poetry, both before and after his divorce. In her he found the muse he felt could free him from the ever–hovering clouds of his war memories (and yet it was she who later deserted him).

The publication of Good–Bye to All That offered financial security for the first time since the end of the war. Yet it cost Graves the once rich friendships of Sassoon, Edmund Blunden and others. Although aided by Riding’s presence and unpleasantness, Sassoon’s rift with Graves was triggered by what Sassoon considered Graves inventions in ‘Goodbye’, while he remained strangely oblivious to the fact that his own writing on the war contained much that was imaginative.

Overall, this – the first of a two–volume biography – enjoys the promise of being a lasting evaluation of the early years of one of the truly important poets of the Great War; the work of a biographer of impressive ability.