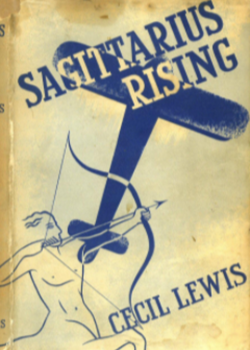 Sagittarius Rising covers Cecil Lewis’s life as a flyer from 1915 to 1921. Published in 1936 it is not an autobiography. He kept no diaries during this period but records the incidents and memories which had stayed with him, 18 years after the war had ended. During this period, he served in the Great War and trained pilots in China after it ended. The latter period will be of less interest to readers of this website.

Lewis’s education at Oundle, a school known for its teaching of science and engineering, made him an attractive recruit for the RFC, although he didn’t realise it. He recalls his recruitment, training, service on the Somme, working as a test pilot, on home air defence and finally his return to the Western Front.

Fragile new technology and the dangers of war in the air made his hold on life tenuous. The initial training involved many forced landings by fellow pilots, in everything from meadows to sewage farms. Lewis was fortunate to be first sent to the St Omer depot and not the front. There he had an OC who recognised 14 hours of flying time was totally inadequate preparation for active service and in effect a death sentence. Lewis was able to increase his flying experience, but many were not so fortunate and lost their lives before the flying hours requirement of 14 hours was increased.

By the time he arrived on the Somme he had substantial flying experience. On the first day of the battle, from the air, he witnessed the detonation of the Lochnager mine. His description of it is typical of the many vivid accounts he provides of his wartime experience. Artillery spotting, contact patrols and combat in the air with the Germans on Western Front are some of the flying activities discussed.

Many of those he flew with lost their lives. Amongst them was Albert Ball but also some were close friends, only referred to by their first names. They lost their lives for many different reasons: in combat with the Germans, after being shot by their own side, because of equipment failure and because of moments of carelessness on the ground. Flying was a dangerous life and off duty pilots lived a high-spirited life, knowing that each night off duty might be their last. Lewis’s account is full of boisterous and drunken evenings and short-lived liaisons with young women.

The virtues of this book are many.

The prose is often elegant and provides a powerful insight into the life of the RFC/RAF pilot.

The war shaped Lewis’s attitude to life, by the time it ended he was still four months from his 21st birthday. It is a personal account and other pilots did not share his views. For example, many disagreed with his view that combat in the air was the only part of the Great War where there was chivalry and honour. However, it is an elegant and powerful account which should be read.

Reviewed by Tim Halstead for The Western Front Association (September 2021)